Have a look at these Important Questions that are based on the Union Budget 2019. The Budget 2019 Quiz will be helpful for every competitive exam aspirant to revise the Budget 2019 easily. 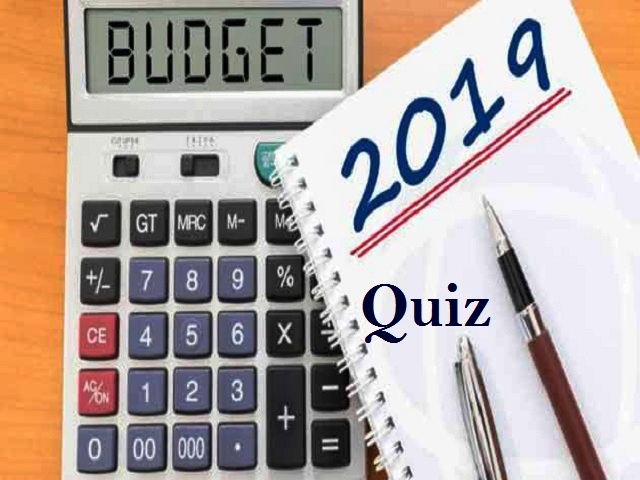 5 July 2019: Have a look at these Important Questions that are based on the Union Budget 2019. The Budget 2019 Quiz will be helpful for every competitive exam aspirant to revise the Budget 2019 easily. These questions do make you aware about the new scheme announced, changes in tax regime, allocations for various sectors and much more. Try these questions and know the Budget 2019 facts and figures in quick time.

1. What is the name of new water conservation scheme announced by Finance Minister Nirmala Sitharaman during budget 2019 speech?

2. Name of education body announced by Nirmala Sitharaman to promote research in India.

3. The Union Government has proposed to make which two identity cards interchangeable?

4. How much amount is allocated in the Union Budget 2019 to boost credit in Public Sector Banks?

5. The Union Budget 2019 targets what amount through the disinvestment of CPSEs including Air India?

6. The Union Government has proposed modernization of which among the following in Budget 2019 to enable ease of living?

7. An encyclopedia is being developed on which among the following freedom fighters?

8. Name the yojana that has been proposed by the Union Government for the fisheries sector?

9. The Budget 2019 reduces tax rate for companies having annual turnover up to Rs 400 crore. How much tax these companies need to pay now?

10. For which sector a new TV channel would be launched as announced in Budget 2019?

Nirmala Sitharaman announced Jal Jeevan Mission under Jal Shakti Mantralaya to achieve Har Ghar Jal aim to all rural households by 2024. She also informed that 1592 critical and over exploited Blocks spread across 256 District being identified for the Jal Shakti Abhiyan.

Union Finance Minister Nirmala Sitharaman while presenting the Union Budget 2019 announced that PAN card and Aadhaar will be made interchangeable.

Union Budget 2019 proposes the provision of Rs. 70,000 crore to Public Sector Banks to boost credit. The banks have been tasked to leverage technology, offer online personal loans and doorstep banking, and enable customers of one PSB to access services across all PSBs.

Budget 2019-20 targets Rs 1, 05,000 crore through the disinvestment receipts of the FY 2019-20. Government will re-initiate the process of strategic disinvestment of Air India, and other CPSEs for strategic participation by the private sector.

The Union Government has proposed modernization of Railway stations to enable ease of living. The modernization process will be undertaken later this year.

Finance Minister Nirmala Sitharaman has announced that the development of Gandhipedia. The encyclopedia is being developed by national council for science museum to sensitize the youth on Gandhian philosophy.

The Union Government has proposed Pradhan Mantri Matsya Sampada Yojana to address critical infrastructure gap in fisheries sector. A robust fisheries management framework will be set up by department of fisheries.

The budget 2019 reduces Tax rate to 25% for companies with annual turnover up to Rs. 400 crore. The move will benefit over 99 percent Indian Companies.

Government will start a new TV channel under DD bouquet of channels for start-ups. This channel will help start-ups to strengthen and grow their initiatives in a better way. Channel’s name and programmers will be announced soon.