US House Speaker Nancy Pelosi announced an official impeachment inquiry against President Donald Trump saying, “No one is above the law.” 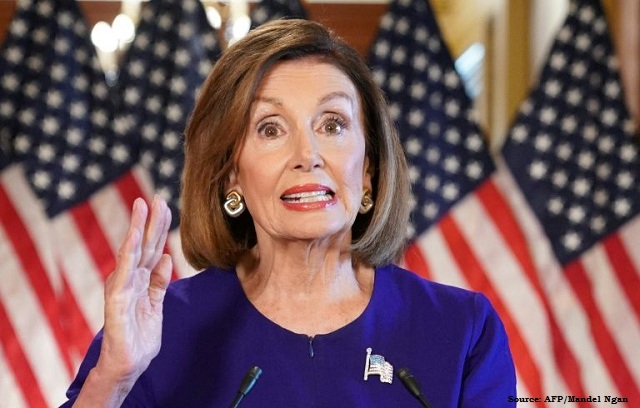 US House Speaker Nancy Pelosi announced an official impeachment inquiry against President Donald Trump on September 24, 2019. Pelosi had earlier been wary of calls for the impeachment of Trump. The Democrat politician finally yielded saying, “No one is above the law.”

While addressing the press, Nancy Pelosi announced that the House of Representatives is moving forward with an official impeachment inquiry. The House Speaker directed the six House committees to proceed with their investigations under the umbrella of an impeachment inquiry. “The President must be held accountable. No one is above the law,” Pelosi added.

Pelosi announced that while the Judiciary Committee has already begun the impeachment probe, the other committees including the Intelligence Committee, oversight, ways and means, foreign affairs and financial services committees will be joining them formally in a broader inquiry.

However, the formal impeachment inquiry is just the first step towards the possible impeachment of Trump. The House of Representatives will need to have a majority vote on articles of impeachment to impeach Trump and the Republican-controlled Senate would have to hold an impeachment trial, which seems unlikely.

Nancy Pelosi’s announcement of impeachment inquiry comes after reports surfaced of a phone call by US President Trump, calling upon a foreign power to intervene in his elections. “This is a breach of his constitutional responsibilities,” claimed Pelosi. 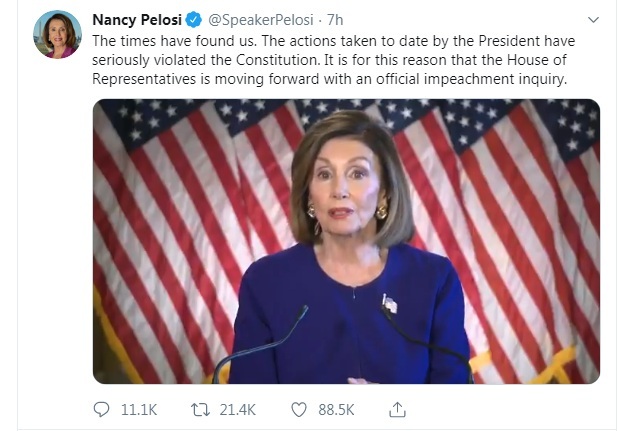 President Donald Trump has responded to the official impeachment inquiry against him by calling it a 'witch hunt'. Trump tweeted saying that the Democrats never even saw the transcript of the call. Trump further labeled the impeachment probe as 'Presidential Harassment'. 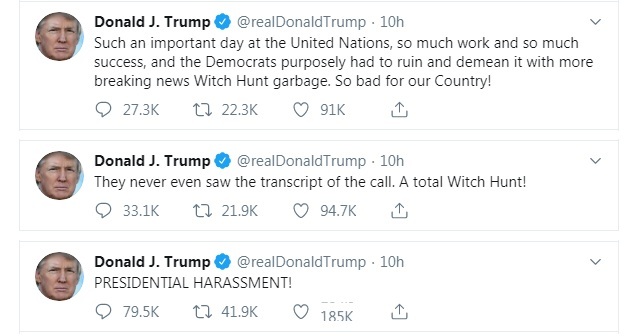 Trump also tweeted saying that Mike Pompeo, the US Secretary of State has received the permission from Ukraine Government to release the transcript of the phone call made by Trump to their President.

• On September 17, the intelligence committee Inspector General formally notified the Congress that the administration was forbidding him from turning over a whistle-blower complaint. This is a violation of the law.

• Shortly thereafter, press reports emerged of a phone call by the President of the United States, calling upon a foreign power to intervene in his elections. This is a breach of his constitutional responsibilities.

• The law states that the Director of National Intelligence (DNI) shall provide the Congress the full whistleblower complaint.

• For more than 25 years, I have served on the intelligence committee as a member, as a ranking member even before I was in the leadership. I was there when we created the office of the Director of National Intelligence, which did not exist before 2004.

• I was there even earlier in the 90s as well, when we wrote the whistleblower laws and continue to write them to improve them to ensure the security of our intelligence and safety of our whistleblowers.

• I know what the purpose was and we proceeded with balance and caution as we wrote the laws. I can say with authority that the Trump administration’s actions undermine both, our national security and our intelligence.

• On September 26, the acting DNI will appear before the House Intelligence Committee and that time he must turn over the whistleblower's full complaint to the committee. He will have to choose whether to break the law or honour his responsibilities to the constitution.

• The actions taken today by the President have seriously violated the constitution, especially when the President says, “Article 2 says, I can do whatever I want.”

• For the past several months, we have been investigating in our committees and litigating in the courts so the House can gather all the relevant facts and consider whether to exercise its full Article 1 powers including a constitutional power of the utmost gravity approval of Articles of impeachment.

• The actions of the Trump presidency revealed dishonourable facts of a President’s betrayal of his oath of office, betrayal of our national security and betrayal of the integrity of our elections and therefore today, I am announcing official impeachment inquiry against Donald Trump.