Haley attacked the council for a "disproportionate focus and unending hostility toward Israel". The Human Rights Council had passed five resolutions against Israel, more than the number passed against North Korea, Iran and Syria combined.

However, Haley asserted that United States will continue to promote human rights outside of the council and would consider rejoining it in the future, if reforms are made.

The withdrawal was praised by Republican lawmakers including Senator Lindsey Graham of South Carolina and was commended by Israeli Prime Minister Benjamin Netanyahu. 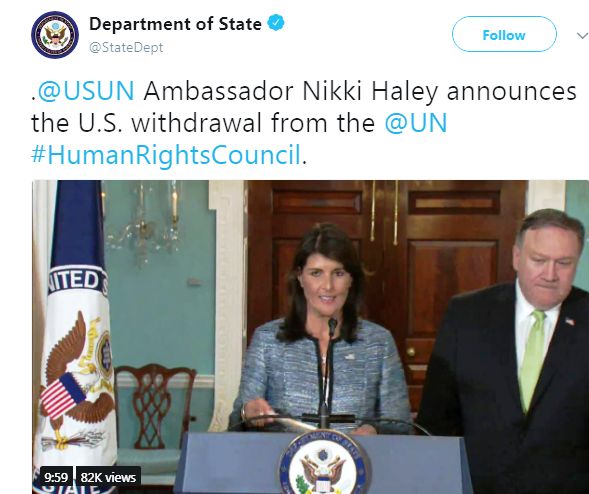 Haley attacked the council for a "disproportionate focus and unending hostility toward Israel". The Human Rights Council had passed five resolutions against Israel, more than the number passed against North Korea, Iran and Syria combined.

Listing out all the US grievances with the UN body, Haley said “human rights abusers continue to be elected to the council.” She also slammed the council for continuously politicising the wrongdoings of countries with positive human rights records to distract the public from the abusers in its ranks.

Haley said, "The Human Rights Council has been a protector of human rights abusers, and a cesspool of political bias."

Haley was joined by the US Secretary of State Mike Pompeo in defending the move to withdraw from the council, citing its failure to hold human rights abusers accountable and its ignorance towards US’ call for reform.

Haley also pointed that the through membership of the council, abusers guarantee their own impunity against inhumane actions. She denounced the council’s failure in addressing the massive abuses in Venezuela and Iran.

Reactions from the United Nations

Reactions against the US withdrawal

The move was immediately condemned by a dozen of charitable groups, who wrote that they were "deeply disappointed with the Administration's decision to withdraw the United States from the United Nations Human Rights Council, the premier intergovernmental human rights body."

Salil Shetty, Amnesty International's secretary-general, said "Once again President Trump is showing his complete disregard for the fundamental rights and freedoms the US claims to uphold. While the Human Rights Council is by no means perfect and its membership is frequently under scrutiny, it remains an important force."

Senator Chris Coons of Delaware, a Democrat serving on the Foreign Relations Committee, said the decision “sends a clear message that the Trump administration does not intend to lead the world when it comes to human rights.”

1. US pulls out of UN’s migrant and refugee pact

The United States has withdrawn itself from a United Nations pact to improve the handling of migrant and refugee situations deeming it ‘inconsistent’ with its immigration policies.

2. US President Donald Trump signs executive order to pull US out of TPP

Donald Trump signed an executive order on January 23, 2017, immediately after his accession to power, to formally pull the country out of the negotiating process of the Trans-Pacific Partnership (TPP), one of the major international trade initiatives of Barack Obama. Trump felt the partnership to be harmful to American workers and manufacturing.

3. Trump announces US withdrawal from Paris Agreement on Climate Change

President Donald Trump announced on June 1, 2017 that he would withdraw the United States from the landmark 2015 Paris agreement to fight climate change, stating that the accord would undermine US economy, cost US jobs, weaken American national sovereignty and put the country at a permanent disadvantage to the other countries of the world.

4. US withdraws from UNESCO

The United States and its ally Israel announced on October 12, 2017 that they were pulling out of the UN's culture and education body, UNESCO, accusing it of anti-Israel bias.

The United States Federal Communications Commission voted along party lines on December 14, 2017 to repeal the 2015 Open Internet Order which protects net neutrality in the United States.

6. US withdrawal from the landmark 2015 nuclear deal with Iran

The President of United States, Donald Trump on May 8, 2018 announced US withdrawal from the landmark 2015 nuclear deal with Iran. The Iran nuclear deal or Joint Comprehensive Plan of Action (JCPOA) was forged in 2015 during the Obama administration as a multi-nation effort to keep Iran's nuclear program in check.