Vijaya Nirmala appeared in more than 200 films in Telugu, Tamil and Malayalam, and directed 44 Telugu films. 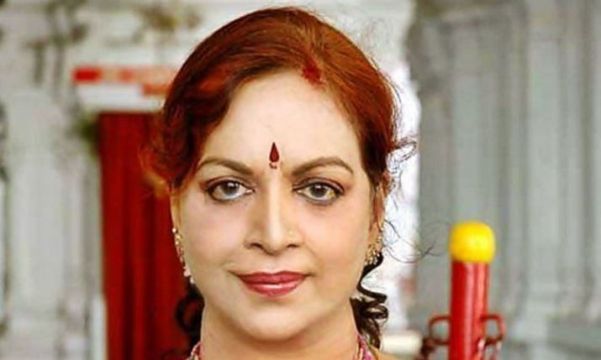 Veteran Telugu actress and director Vijaya Nirmala passed away in a Hyderabad hospital on June 27, 2019. She was 75. Her son, actor Naresh, announced her death on Twitter and revealed that the last rites will be held on June 28.

No cause of death was given; Naresh wrote simply that Vijaya Nirmala died of 'sickness.' He wrote, “I regret to inform you that my Mother senior Artiste, prominent Producer and Director, Dr. G Vijayanirmala Garu  passed away during early hours today, that is, 27.6.2019, at Continental Hospitals, Hyderabad, due to sickness. She was 75.”

Vijaya Nirmala appeared in more than 200 films in Telugu, Tamil and Malayalam, and directed 44 Telugu films. Vijaya Nirmala is survived by her husband Krishna, son Naresh and step-children, one of whom is actor Mahesh Babu. On Twitter, actor Sudheer Babu, who is married to Vijaya Nirmala's step-daughter Priyadarshini, wrote: "A terrible day for my family. A pioneer, a legend and most importantly my mother-like personality Vijaya Nirmala garu made her way to God."

•    Vijaya Nirmala started her career as a child actor. At the tender age of five, she made her acting debut in 1950 Tamil film Machcha Rekkai and four years later she forayed into Telugu cinema with the film Panduranga Mahatyam.
•    Her debut film in Tamil was Engaveettu Penn, which was followed by movies including Panama Paasama, En Annan, Gnanaoli and Uyira Maanama.
•    She met her second husband Krishna on the sets of Saakshi (1967), her second film in Telugu, and they starred together in 47 films.
•    Her small screen debut came with Balaji Telefilms' Pelli Kanuka. Soon after, she launched her own banner Vijaya Krishna Movies and produced 15 films.
•    In 1964, she worked in Malayalam film Bhargavi Nilayam, with that movie she rose to stardom and got noticed. She went on to work with Prem Nazir again in Udhyogastha.

Vijaya Nirmala holds a Guinness Record for most number of films directed by a female filmmaker. In 2008, the Andhra Pradesh government conferred her with Raghupathi Venkaiah award for her contribution to Telugu cinema. 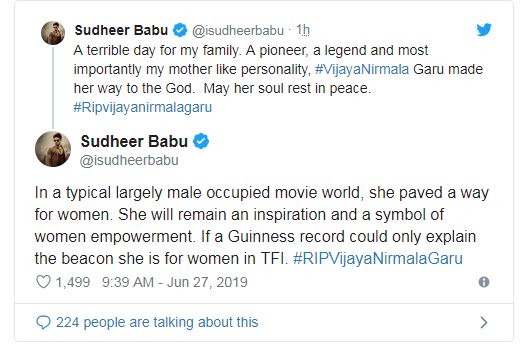 Also Read | NRC Assam: How to check your name in draft exclusion list