Was Rohit Sharma out or not out? Twitterati says not out, third umpire trolled for ‘controversial decision’

Rohit Sharma Controversial Dismissal: Twitterati convinced that Rohit Sharma was not out during India vs West Indies, third umpire trolled. 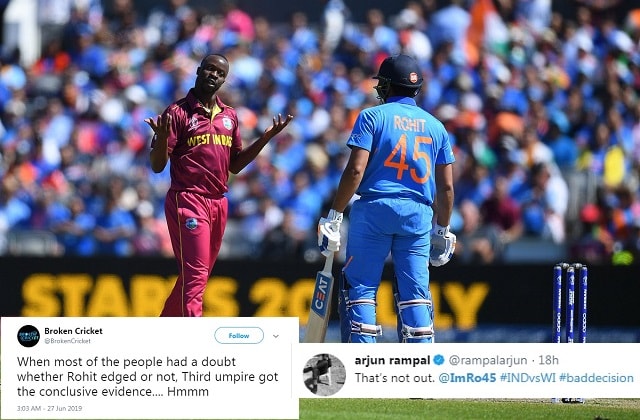 Was Rohit Sharma out or not out? Twitterati says not out, third umpire trolled

Rohit Sharma controversial dismissal: India was in for a huge disappointment when Indian opener Rohit Sharma was given out during the match against West Indies at Old Trafford, Manchester. The original decision of not out was reversed by the third umpire and an amused Rohit Sharma was seen walking back.

Was Rohit Sharma Out? What Really happened?

On the last delivery of Kemar Roach’s sixth over, the ball looked to a have hit either Rohit Sharma’s bat or pad and it was taken by wicket-keeper Shai Hope. The on-field umpire gave a clear not out but the West Indies, convinced that Rohit Sharma was out, asked for a review from third umpire Michael Gough.

The DRS replays showed a spike on the ultraEdge and the third umpire wasted no time to reverse the on-field umpire’s decision and rule out with "conclusive evidence" from the footage. Even the on-field umpire looked unhappy with the decision. Rohit Sharma smiled and walked back. This was Rohit Sharma’s second consecutive low score in the ongoing cricket world cup. Sharma had got out previously on 1 run against Afghanistan.

The review and decision of the third umpire did not go down well with cricket experts and the Indian fans on social media, who were convinced that there was a visible gap between Rohit Sharma’s bat and the ball and that the ball must have hit the pad before landing in Hope’s hands.

Following are some reactions from the twitterati on Rohit Sharma’s controversial dismissal: