The World Economic Forum (WEF) on December 18, 2018 released the Global Gender Gap Report 2018, reviewing 149 countries on the basis of their progress towards gender parity and then lists them accordingly in its Global Gender Gap Index.

These 149 countries are ranked on the basis of four thematic dimensions- Economic Participation and Opportunity, Educational Attainment, Health and Survival, and Political Empowerment.

This year, the Gender Gap Index was topped by Iceland with a score of 0.858, holding the top spot in the index for the 10th consecutive year.

• According to the report, the world has closed 68 percent of its gender gap; and at the current rate of change, it will take 108 years more to close the overall gender gap and 202 years to bring about parity in the workplace.

• The Gender Gap Index 2018 was topped by Iceland, having closed more than 85.8 percent of its overall gender gap.

• Nordic countries dominated the top spots in the index with Norway ranked at 2nd, Sweden at 3rd, and Finland at 4th. 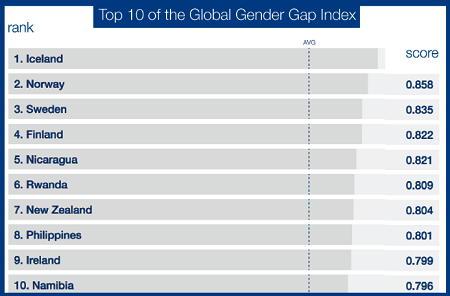