'No First Use' Nuclear Policy: Know all about this doctrine

Defence minister Rajnath Singh recently said that India has strictly followed its ‘no first use’ nuclear doctrine, “circumstances" will determine what happens to this policy in the future.

Defence Minister Rajnath Singh's remarks about 'no first use' nuclear policy of India come amid heightened tensions between India and Pakistan after the Government of India revoked Jammu and Kashmir’s special status.

Rajnath Singh’s tweet has started a fresh debate about ‘No first use’ doctrine. India had announced its nuclear doctrine in 1999 in which it had declared a 'no first use policy' i.e. India will not be the first country to launch a nuclear weapon but retained the right to retaliate in response to an atomic strike.

What is ‘No First Use’ Doctrine?

‘No first use’ (NFU) is basically a pledge or a policy by a nuclear power country for not to use nuclear weapons as a means of warfare unless first attacked by an adversary using nuclear weapons. This concept of ‘No first use’ is also applied to chemical and biological warfare. 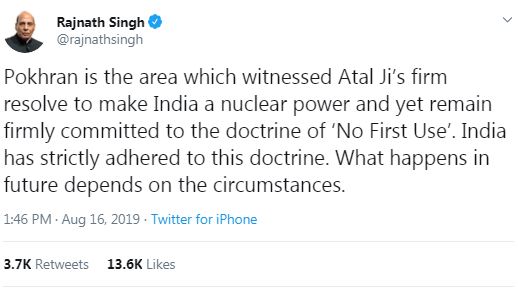 ‘No First Use’ Doctrine in India

India conducted five nuclear tests and became a nuclear weapon state during Atal Bihari Vajpayee’s tenure as prime minister in 1998. Few days later Pakistan had conducted six tests. Soon after that India brought out its nuclear doctrine in 1999 that had ‘no first use’ policy. It means India will not be the first to launch a nuclear weapon but retained the right to retaliate in the condition of an atomic attack. The doctrine also says that India will not be the first to initiate a nuclear first strike, but will respond with punitive retaliation should deterrence fail and that decisions to authorise the use of nuclear weapons would be made by the Prime Minister or his designated successor(s).

About three years ago, in 2016, the then Defence Minister Manohar Parrikar had raised questions about ‘no first use’ doctrine; he had asked why should India bind itself to a no first use policy. After that, Lieutenant General BS Nagpal, the former commander-in-chief of the Strategic Forces Command, was reported to have said that the No First Use policy is a formula for disaster.