10 Most Beautiful Stepwells in India: Check the full list here

10 Most Beautiful Stepwells in India: India was one of the most developed countries in the history of the world. It was known as the Golden Bird in ancient times. India has provided the world with numerous architectural wonders and one of them is the stepwells.

Let us take you through the 10 most beautiful stepwells of India.

What is a Stepwell?

A stepwell is a well or a pond that is designed elaborately with a staircase and is used for storing water. The main purpose of building a stepwell is to ensure all-year-round availability of the water.

Stepwells are known as baori, baoli or vavs and are found spread across India, mostly in the states of Gujarat and Rajasthan. 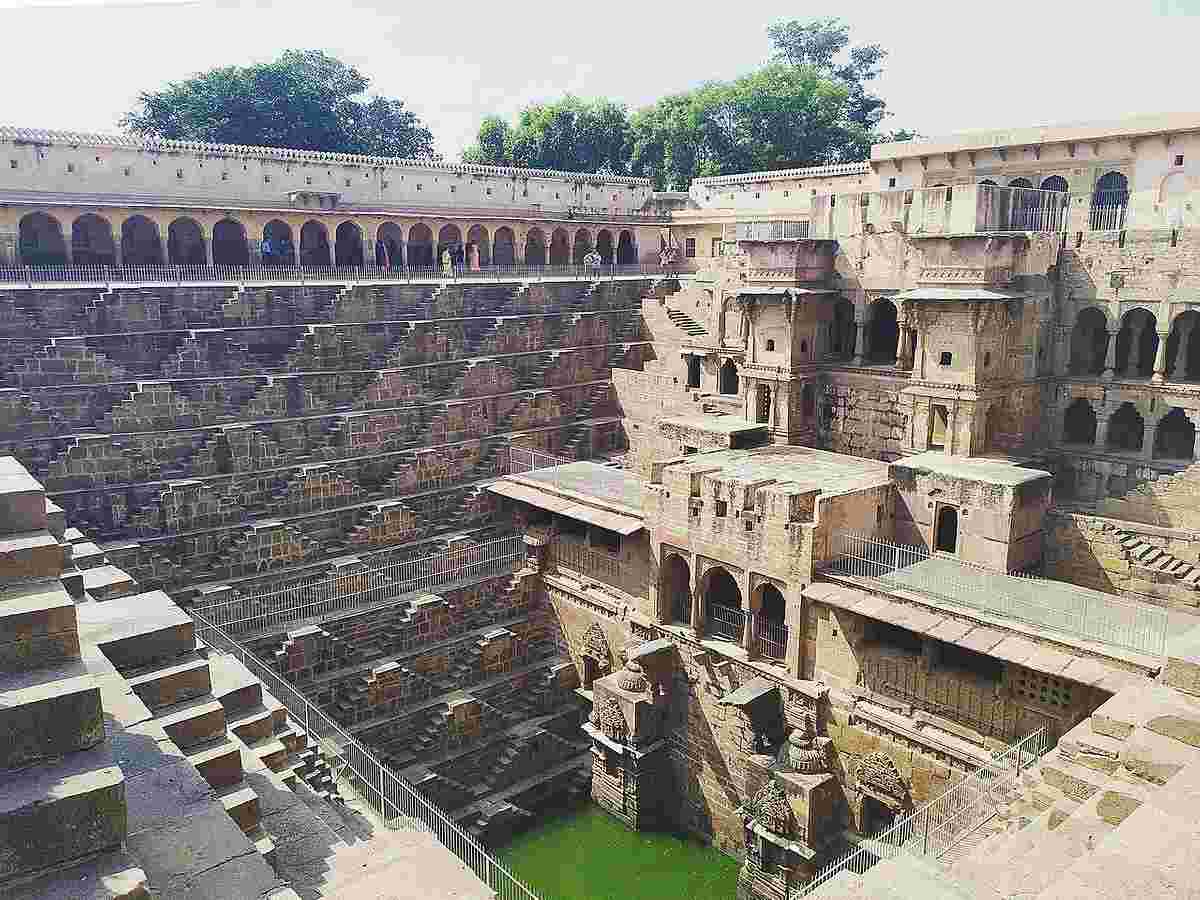 The Chand Baori is one of the most beautiful stepwells in India, it is known for its elaborate work highlighted by diamond-shaped staircases that descend into the well.

The Chand Baori stepwell is situated in Abhaneri village of Rajasthan, it is said to have been constructed in the 9th Century during the reign of King Chanda of the Nikhumbh Dynasty.

It is one of the most exquisite stepwells consisting of 3500 stairs and a total of 13 floors. The stairs go down as close to 20 meters from the top.

This makes Chand Baori the deepest stepwell in the country. 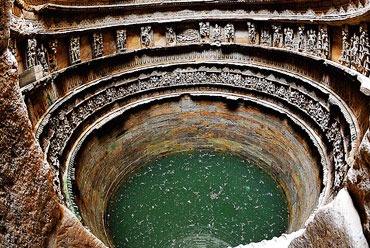 Rani Ki Vav is one of the most fascinating pieces of evidence of the architectural marvel of the Chalukya Dynasty.

It is situated in Patan, Gujarat and is also a UNESCO world heritage site. This stepwell was built in the 11th Century by Rani Udhayamati as a memorial to her late husband King Bhimdev I.

There are seven levels in the stepwell and each level is adorned with religious images and scriptures. It is said that this stepwell was used as a place of worship. Various images of Vishnu in his many avatars can be found on the walls of the stepwell.

Agrasen Ki Baoli is situated in Hailey Road, Connaught Place, New Delhi. It is one of the most popular tourist attractions in Delhi. The increase in popularity of this stepwell was witnessed after some of the movie sequences in PK were shot in this location.

Legends say that this baoli was built originally by king Agrasen, but the architecture of this stepwell indicates that it was probably rebuilt and belongs to the 14th Century most likely during the rule of the Tughlaq or Lodi Dynasty.

In the present time, the Agrasen Ki Baoli is a protected monument under the Ancient Monuments and Archaeological Sites and Remains Act of 1958.

These stepwells were also used as places of worship by the people of Hampi. 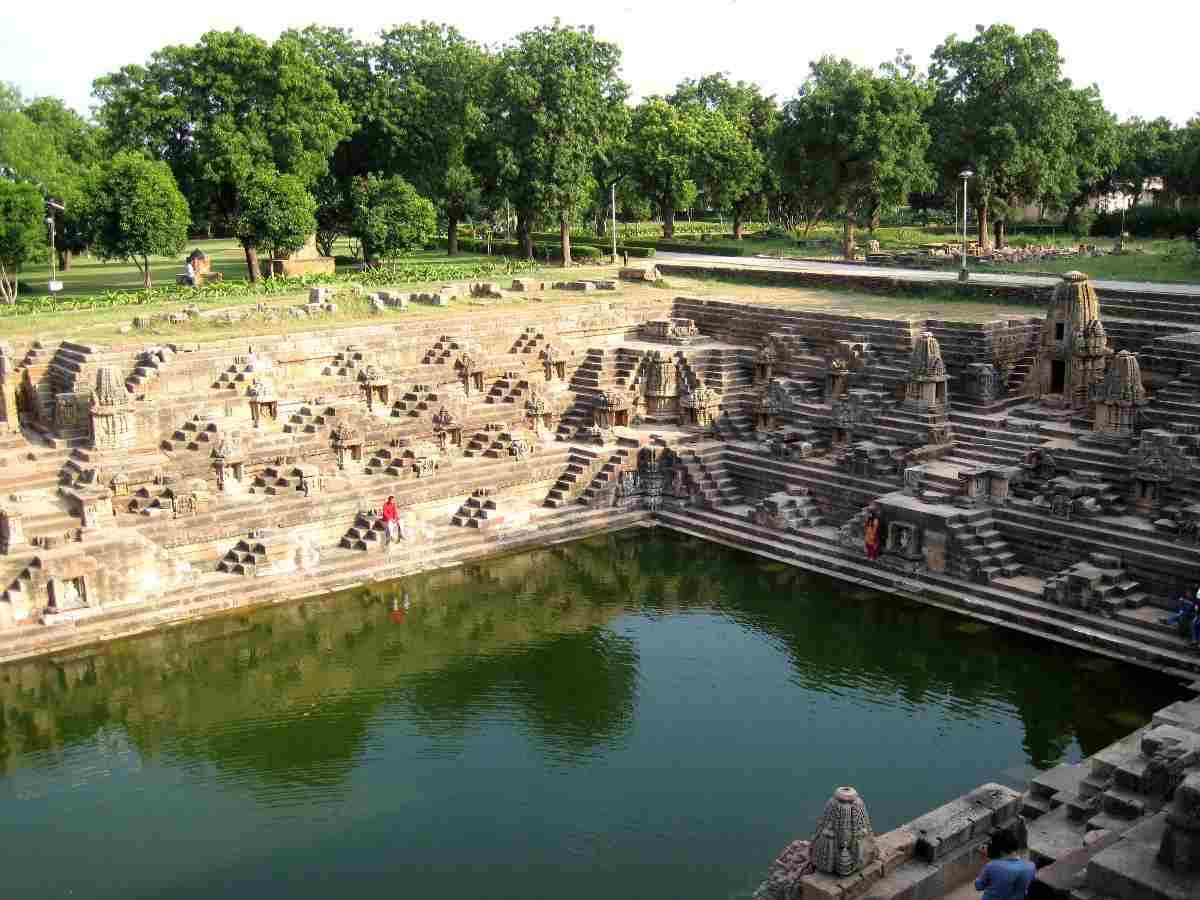 The Surya Kund in Gujarat is a stepwell that is situated in the vicinity of the Surya Temple, which is located in the Modhera Village, Mehsana, Gujarat.

This stepwell was constructed in the 11th Century under the rule of Bhimadeva I of the Chalukya Dynasty, the temple is a visual delight with 180 miniature shrines dedicated to the gods Ganesha, Vishnu and others.

The stairs of the stepwell exhibit great symmetry when you look at them from a distance. 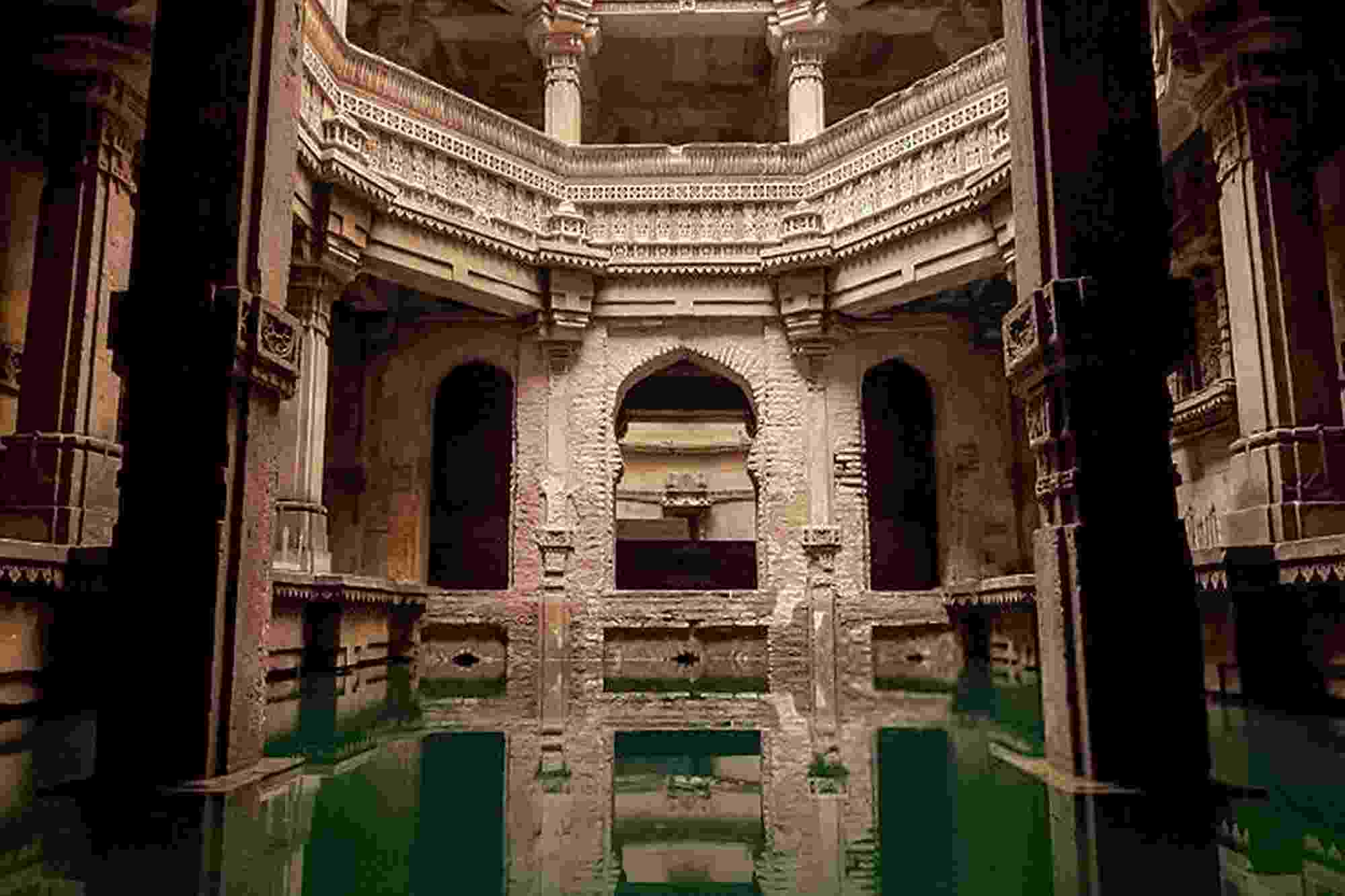 The Adalaj Vav is a masterpiece of stone masonry with intricate carvings, it was built in the 15th Century by Mahmud Begada to commemorate Queen Rudabai, who was the wife of Veersinh the chieftain of Vaghelas. 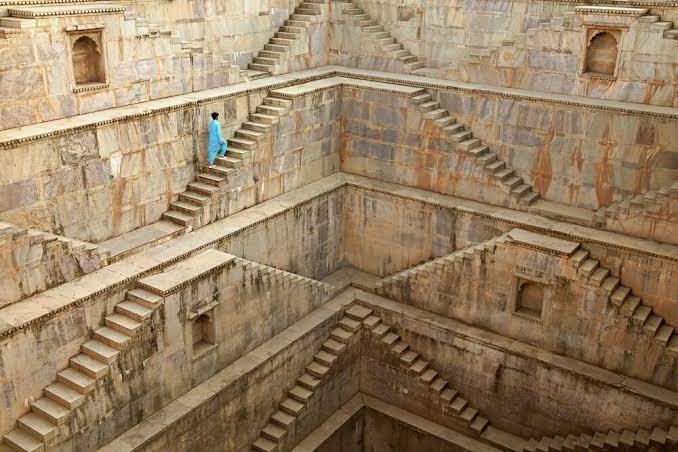 Raniji Ki Baoli is a stepwell that is constructed in the 17th Century by Rani Nathavati Ji and boasts of striking architecture. It is 46 meters deep stepwell. It is an important historical monument in the city.

Jaipur is home to some beautiful structures and one of them is the Panna Meena Ka Kund which was constructed in the 16th Century to provide drinking water to the locals. 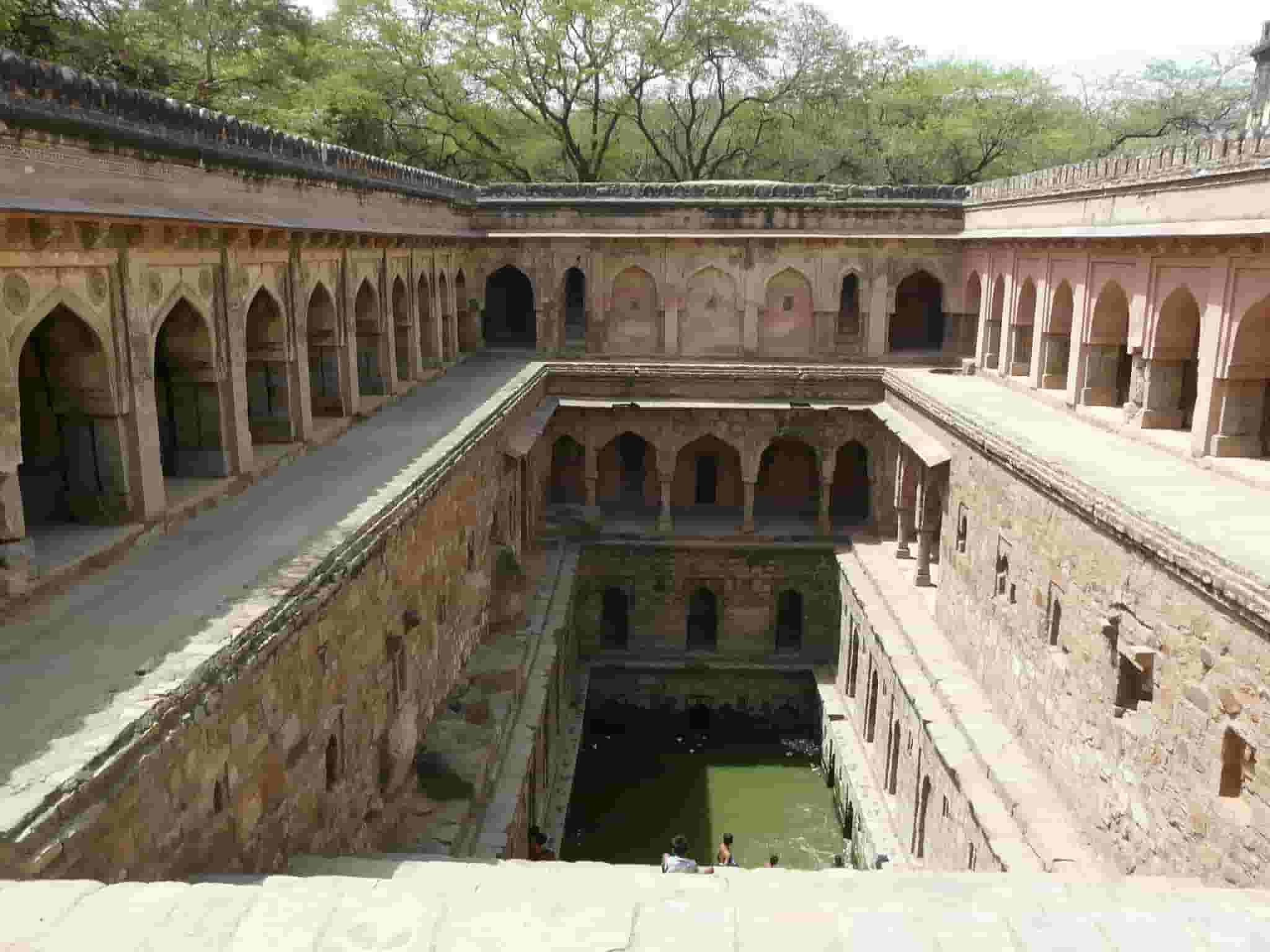 Rajon Ki Baoli was built in the 16th Century by Daulat Khan and was used as a bathing place for the masons. It is one of the three stepwells in Mehrauli Archaeological Park. There is a mosque adjoining the stepwell which was used by Daulat Khan to offer prayers. 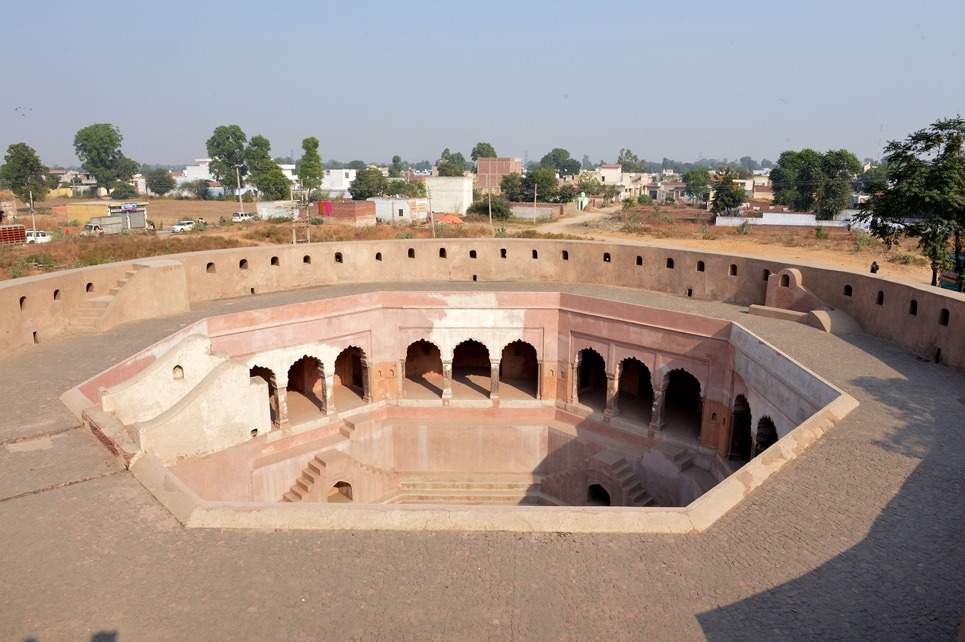 The Baoli Ghaus Ali Shah is a stepwell that was constructed by Ghaus Ali Shah. It was used by the women of the area to take bath and had compartments where they could relax. It was built in the 18th Century.

What is the largest stepwell in the world?

Chand Baori is the largest stepwell in the world.

What is the deepest stepwell in the world?

Chand Baori is the deepest stepwell in the world.
Get the latest General Knowledge and Current Affairs from all over India and world for all competitive exams.