The National Panchayati Raj Day is observed on 24th April every year. The 73rd Constitutional Amendment Act,1992 came into force from 24 April 1993. Panchayati Raj Day paved the way for the 3 tier Panchayati Raj System in the country i.e. Gram Panchayat at the village level, Panchayat Samiti at Block level, and Zila Parishad at District level.

History of Panchayati Raj in India;

India is a very vast country and it is called the world's largest democracy. Due to the high population and large area in many states, the person sitting at the highest post (I mean Chief Minister of the state) in the state does not get actual scenario of the problems faced by the people of rural areas. So it was decided that the power of democracy should be decentralised.

In order to fulfill this requirement; a committee was constituted in 1957 under the chairmanship of Balwantrai Mehta. The Committee recommended the democratic decentralization of power. Hence the concept of Panchayati Raj was constituted in India for the first time in history. The Committee recommended a 3 tier Panchayati Raj System in the country;

A). Gram Panchayat at the village level

B). Panchayat Samiti at Block level

Rajasthan was the first state in the country where the Panchayati Raj system was implemented. This scheme was inaugurated by late Prime Minister Jawaharlal Nehru on October 2, 1959, in Nagaur district. This scheme was later on implemented in the Andhra Pradesh in 1959 itself. 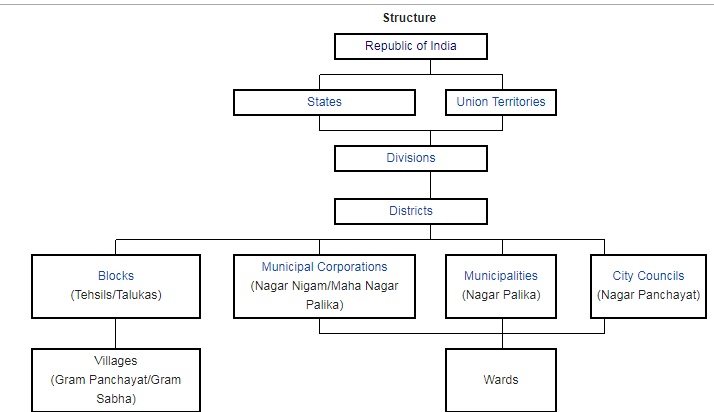 The most significant aspect of this day is the diversification of political power in the hands of common men. Now it seems that every village, block, and district has a separate Chief Minister to run the administration of that particular territory.

Panchayati Raj System is assumed to be started in India since April 24, 1992. Since then it is spreading its wings in all regions of the country.

The 14th Finance Commission had allocated more than 2 lakh crore Rupees to Gram Panchayats for 5 years to undertake physical and social infrastructure projects in the villages.

Ministry of Panchayati Raj commemorates the following awards to the Panchayats. These awards are given to the best performing Panchayats on every 24th of April.

Powers, Authority, and Responsibilities of Panchayats:

State Legislatures have the legislative powers to confer on Panchayats such powers and authority as may be necessary to enable them to function as institutions of self-government. They may be entrusted with the responsibility of preparing plans and implementation of schemes for economic development and social justice.
Powers to Impose Taxes and Financial Resources

A state may authorise a Panchayat to levy, collect taxes, impose duties, tolls, fees, etc. The grants-in-aid may be given to the Panchayats from the Consolidated Fund of the State for the development of the area.

In conclusion it can be said that the commencement of the Panchayati Raj system in the country is a good step for the decentralisation of the power in the hands of many people.

Office of the President of India: Instructions to electors