Armenia And Azerbaijan Conflict: Why Is India Supplying Pinaka Rockets & Other Munitions To Armenia?

In a recent escalation in the conflict between Armenia and Azerbaijan, India and Armenia agreed to a billion-dollar supply agreement for weapons, including Pinaka rocket launchers.

Armenia and Azerbaijan Conflict: Amid rising tensions with its neighbor Azerbaijan, Armenia has inked a contract with India, expected to be worth 2000 crore, to purchase the Made in India Pinaka multi-barrel rocket launchers, missiles, rockets, and other ammo.

The government-to-government contract was used to sign a number of agreements for the delivery of weapons and ammunition to Armenia earlier this month.

The precise quantity of the munitions to be supplied is unknown, but it includes India’s indigenous Pinaka missile, anti-tank rockets, and other ammunition.

Read More | Why are Armenia and Azerbaijan at War? The Nagorno-Karabakh Conflict Explained.

Why Is India Supplying Arms To Armenia?

It is not the first time that Armenia has imported ammunition from India. In 2020, India sold 4 Swathi Weapon Locating Radars to Armenia worth Rs 350 crore.

With regulatory changes and active government assistance in securing foreign orders, India has been putting out substantial efforts to increase its exports of ammunition. Under its "Make in India" policy, the government has implemented a number of steps to increase domestic production.

The Indian government has chosen a two-pronged strategy that minimises defence equipment imports while promoting domestically produced exports to other friendly nations.

India’s arms exports have substantially increased since then.

The Defence Ministry has a target to produce weapons worth 1.75 lakh crore and export ammunition and weapons worth 35,000 crores to foreign nations.

The Indian Defence sector, the second largest armed force is at the cusp of revolution.

Defence exports grew by 334% in the last five years; India now exporting to over 75 countries due to collaborative efforts.#8YearsOfMakeInIndia #AmritMahotsav @makeinindia pic.twitter.com/r2p8ErqmIq

The fact that exports climbed by around eight times in the fiscal year 2022 compared to the previous financial year is important to notice.

In January of this year, a crucial export contract for BrahMos supersonic cruise missiles to the Philippines for $375 million (Rs 2,770 crore) was finalized.

According to the Indian government, the nation sells military and defence armaments to around 75 nations. India mostly exports military equipment to the Philippines, as well as to other countries of South-East Asia, the Middle East, and Africa.

What Is The Pinaka Rocket Launcher?

The Pinaka is a multi-barrel rocket launcher developed by the DRDO (Defence Research and Development Organization) and produced indigenously in India for the Indian army.

The rocket launcher is already in service with the army, deployed on the borders of Pakistan and China. 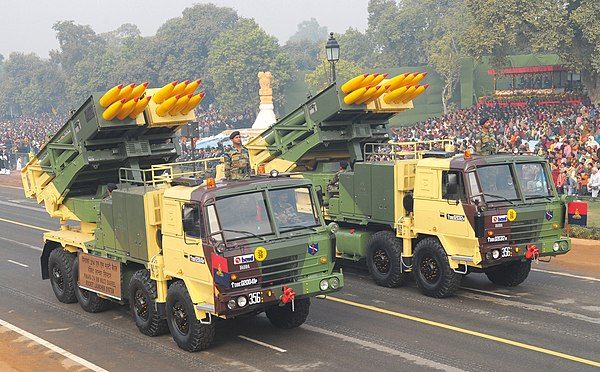 Source: Wikipedia | The Pinaka rocket launcher being displayed at the Republic Day Parade.

The rocket launcher was developed specifically for the Indian army. The Pinaka can locate the location of enemy launchers and positions and track approaching artillery shells, mortar rounds, and rockets. It has a salvo firing time of 44 seconds for 12 HE rockets.

One Pinaka system is composed of six launchers, six loader trucks, six replenishment vehicles, two command post-transporting vehicles, and a vehicle to transport the meteorological radar to give information on the wind.

The Army typically sends out a battery that has 72 rockets in total. In 44 seconds, all of the 72 missiles may be launched, destroying a 1 km2 area. Each launcher has a separate direction of the firing.

With the help of a fire control computer, the system is flexible enough to fire all the rockets at once or only a handful at a time. The six launchers of a system are all connected via a command post. Each launcher has its own computer, allowing it to function independently in the event that it becomes separated from the other five vehicles during a battle.

The Pinaka missile launcher is the first-ever indigenously developed military equipment to be sold to a foreign nation. Additionally, it is expected that the Armenia-India deal will have a significant geopolitical impact on Armenia, Azerbaijan, and India and its neighbors as well, since it will directly involve India in the struggle against Azerbaijan, which has close ties with Pakistan.

Is Armenia friend of India?

Yes, Armenia and India are legal friends. On December 14, 1995, India and Armenia signed a treaty on friendship and cooperation.

How many Pinaka regiments does India have?

The Indian Army intends to operate 16 regiments overall by 2022 and expand to 22 regiments during the next six years.
Get the latest General Knowledge and Current Affairs from all over India and world for all competitive exams.