GK Questions and Answers on Ramayana

The oldest version of Ramayana is composed in Sanskrit language and contains around 24,000 verses which are arranged into various cantos or sarga. It holds a very special place in the Hindu religion. Let us solve an interesting quiz on Ramayana and related to Ancient History. 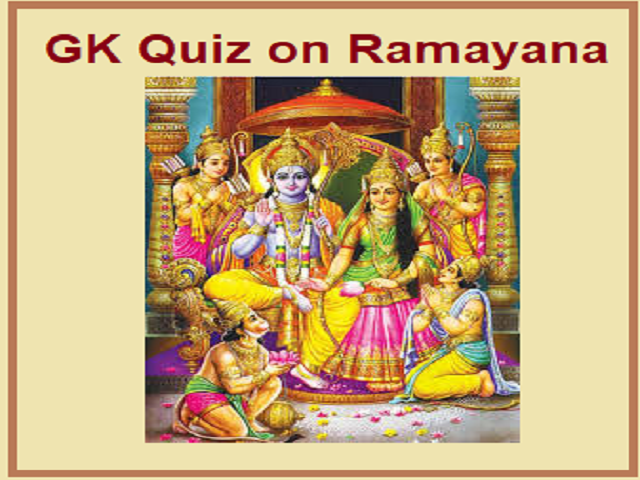 The ancient Indian epic Ramayana describes the birth and journey of Lord Rama and Goddess Sita. It also depicts the history of Tretayug teaching duties of relationships. By tradition, it is known as Adi Kavya where adi means original or first and Kavya means poem.

1. Who had composed the original Ramayana?
A. Rishi Valmiki
B. Tulsi Das
C. Sant Ek Nath
D. Anhinanda
Ans. A
Explanation: The traditional Ramayana was composed by Rishi Valmiki in Sanskrit.

6. What was the name of Lord Rama's father?
A. Shalishuka
B. Nahapana
C. Rajadhiraj
D. Dasaratha
Ans. D
Explanation: Dasaratha was the father of Lord Rama. He was the king of Ayodhya and had three wives namely Kaushalya, Sumitra and Kaikeyi.

9. What was the name of a bow that was used by Lord Rama in Goddess Sita swayamvar to marry her?
A. Pinaka
B. Pindaka
C. Anandaka
D. Rulapand
Ans. A
Explanation: Lord Rama used Lord Shiva's bow in swayamvar of Sita to marry her. The name of the bow was Pinak.

10. Which of the following is/are the versions of the Ramayana that have emerged outside India?
A. Cambodia - Reamker
B. Thailand - Ramakien
C. Burma (Mayanmar) - Yama Zatdaw
D. All the above are correct
Ans. D
Explanation: In the options are mentioned the versions of Ramayana with countries that have emerged outside India.These are some interesting questions and answers based on the Ancient Indian epic Ramayana with an explanation.