What is the history of toilet paper and what were the ancient ways of wiping? 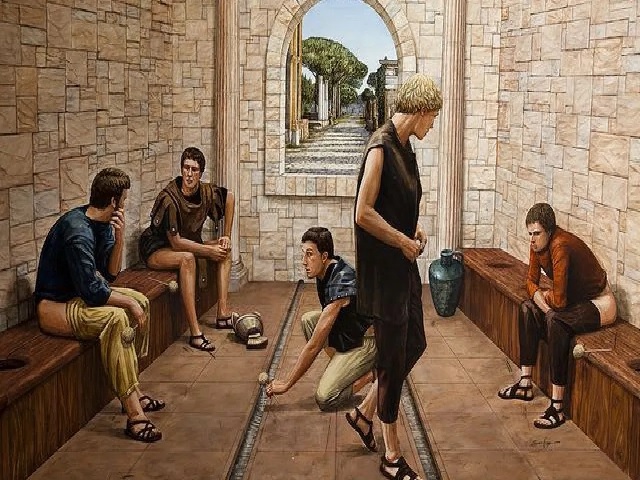 These were used in public toilets of ancient Rome which were made of marble slabs having a series of holes without any dividers. In the middle of the public toilet, there were clay pots or buckets having water (for cleaning the sponge) and the sponges were shared among the people for wiping.

Moss, leaves and pieces of ceramic:

In ancient times, people also used moss or leaves as they were easily available for wiping.

Many ancient people also used pieces of ceramic (often having names of their enemies inscribed on them) for cleaning purposes.

They were the softest and the most expensive form of wiping in ancient times. People used small fragments of cloth to wipe off after the bathroom act. Wealthy people used wool, lace and other fabrics.

Salaka, Cechou and Chugi were used in ancient times. They were made from woods like bamboo and were of the shape of spatulas. The ends of these wiping tools were wrapped in cloth.

How toilet paper came into effect?

In 589 AD, a Chinese scholar named Yan Zhituni wrote that do not use the paper for wiping which have quotations/ commentaries from the Five Classics or the name of sages.

Apart from this, A Chinese emperor used long sheets of paper (2 feet by 3 feet) in medieval China for wiping. In the early 14 century, China was manufacturing toilet paper. In the year 1393, thousands of perfumed sheets of paper were produced for the Hongwu Emperor's imperial family.

Paper was available in the 15th century but was commercialised in 1857 by Joseph Gayetty. He sold the toilet paper in packages of 500 sheets for 50 cents. The toilet paper was marketed as the 'Greatest Necessity of the Age.' Every sheet was infused with aloe and had Gayetty's name. However, his toilet papers weren't as strong as today's three piles of toilet papers.

In 1890, the first perforated toilet paper rolls were introduced to the world. In 1930, a splinter-free toilet paper was manufactured for wiping.

The modern era has access to the premium to low-quality toilet papers, but in ancient times it was like a dream. The cloth or other fabrics such as wool, lace, etc. were used by the wealthier section of the society and can be compared to the present era's three pile tissues. People for ages also used stones, moss, leaves, newspapers, magazines, etc. to wipe off-- which was not a very convenient way of wiping.

Why did the US oil prices fell below zero?