ICC World Test Championship 2019: All You need to Know

The International Cricket Council has issued the schedule for the inaugural season of the ICC World Test Championship (WTC). This championship will commence from Ashes Series to be played between the England and Australia from 1 August 2019. There are 72 Test Matches will be played in 27 series by the 9 teams in the time span of 2 years.

ICC World Test Championship is the new phenomenon of the cricket world. The ICC launched this championship to honour the longest and oldest format of cricket i.e. test cricket. This event will be as important as the the World Cups for men and women in the ODI and T20I formats.

Which teams will participate in this Championship?

There are top nine ranked teams will participate in this championship. There names are;

How many matches will be played?

How does the points system work?

Each team will play six series, with each series weightage for 120 points, distributed over the number of matches in a series. 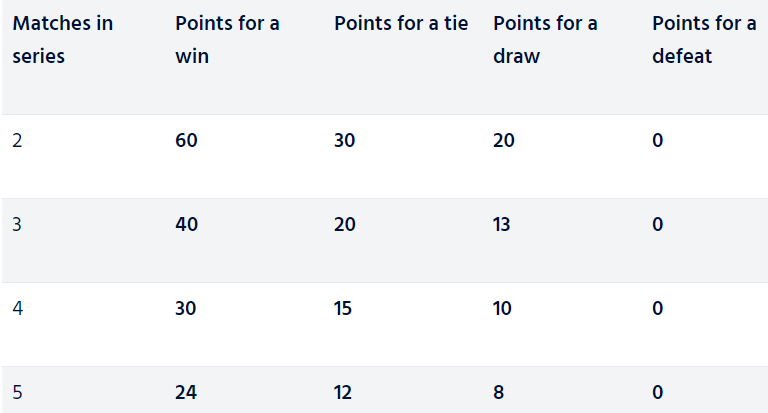 How will winner of the championship be declared?

There are total 71 Test matches in 27 series will be played in two years. Every game in a series will count for points as the world’s best teams go head to head.

If Indian team plays any test series with the Ireland, Afghanistan and Zimbabwe then the points earned during the series will not be counted in the world test championship. The reason is that these teams are out of top 9 ICC ranking.

No. it is not necessary that every team play equal number of test matches.
For example, the Indian team will play 18 matches with six teams. Australia and England will play more matches than India.

So it is expected that the team which plays and wins more matches will be more near to qualify for the final of the test championship.

What about India and Pakistan test series?

As we know that India and Pakistan are not playing bilateral series so this trend will continue but if both the teams qualify for the final; they have to play it.

If the final match remains tie or draw , then both teams will be declared joint winners. So it is expected that the inception of the world test championship will be a great step in reviving the longest and oldest format of the cricket world that is test cricket.