Importance of 16 June in Indian and World History 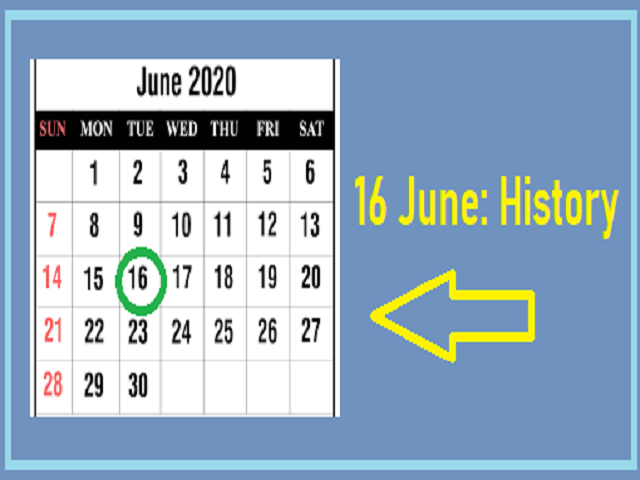 Importance of 16 June in Indian and World History

It is rightly said that history is not created in one day! On 16 June several events took place in the world and India.

1. On 16 June, 1606, the fifth leader of the Sikh religion Guru Arjan Dev was died after being tortured by the Mughal government for around five days.

2. On this day in 1884, the first roller coaster in America was opened at Coney Island in Brooklyn, New York. It is also known as switchback railway.

4. On 16 June, 1950, the famous Bollywood film actor Mithun Chakraborty was born in Kolkata (earlier Calcutta) into a Bengali family.

5. On 16 June, 1963, Valentina V. Tereshkova, a Soviet cosmonaut, became the first woman to travel into space. She travelled into orbit through the spacecraft Vostok 6, which completed 48 orbits in 71 hours.

6. The Pepsi Cola Company was formed in late 1902 due to the rising popularity and demand for the Pepsi-Cola Syrup by none other than Caleb Bradham as the first president. As a result, the business began to grow and Pepsi Cola became an official trademark on 16 June, 1903.

7. On 16 June, 2010, the Tobacco Control Act of Bhutan was enacted by the parliament. It banned the cultivation, harvesting, production and sale of tobacco and tobacco products in Bhutan.

These are some historical events, birthdays, etc. occurred on 16 June and have its own significance.