Physical laws play a crucial role in Science and are considered as fundamental. Many laws of physics are built after various research or some are a modification of existing laws and theoretical research. This article deals with important laws of physics which will help in the preparation of various examinations.

Physical laws are the conclusions drawn on the basis of long year scientific observations and experiments which are repeated again and again under different conditions to reach the assumptions which can be accepted worldwide. We all know our world works on some principles and these principles are drawn by our scientists in the form of certain physical laws.

Important Laws of Physics
1.Archimedes Principle
The principle was discovered in 3rd century B.C. by the Greek mathematician. Archimedes. It states that when a body is partially or totally immersed in a fluid, it experiences an upward thrust equal to the weight of the fluid displaced by it that i.e. its apparent loss of weight is equal to the weight of liquid displaced.
2. Avagadro’s Law
In 1811 it was discovered by an Italian Scientist Anedeos Avagadro. This law states that equal volume of all gases under the same conditions of temperature and pressure contain equal number of molecules.
3. Ohm's Law
It states that the current passing through a conductor between two points is directly proportional to the potential difference across the two points provided the physical state and temperature etc. of the conductor does not change. 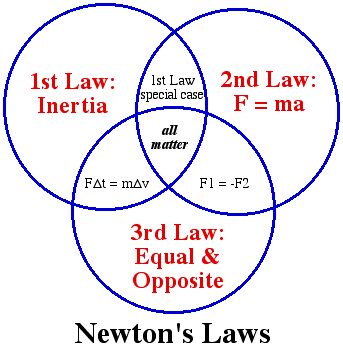 Source: www.hannibalphysics.wikispaces.com
Law of Gravitation: Objects attract each other with a force directly proportional to the product of the masses of the objects and inversely proportional to the square of the distance between them. Hence, for objects on or near the earth, the mass of the earth is very much greater than the object, and so the gravitational force between them makes objects fall towards the earth. That is why lead and feather fall at the same rate in a vacuum.
Newton’s First law of Motion
A body continues in its state of rest, or of uniform motion in a straight line, except in so far as it is compelled by external impressed forces to change that state. It is also called Law of Inertia.
Newton’s Second Law of Motion
The rate of change of momentum is proportional to the impressed force and takes place in the direction of the straight line in which the force acts. In other words “Force is equal to mass multiplied by acceleration”.
Newton’s Third Law of Motion
To every action there is equal and opposite reaction. This is the principle behind the recoil felt on pulling the trigger of a gun.
Newton’s Law of cooling
The rate at which a body cools or loses its heat to its surroundings is proportional to the excess of mean temperature of the body over that of the surroundings, provided this temperature excess is not too large.

5. Coulomb’s Law (1738-1806)
The force between the two electric charges reduces to a quarter of its former value when the distance between them is doubled. The SI unit of electric charge, coulomb, is named after Charles Augustin de Coulomb who established the law.
6. Stefan’s Law (1835-1883)
The total energy radiated from a black body is equal to the fourth power of its absolute temperature.

Why bursting of Balloon makes sound when pricked with a needle?
7. Pascal’s Law (1623-1662)
- When pressure is applied to a fluid, the pressure change is transmitted to every part of the fluid without loss. Hydraulic machines like the hydraulic press work on this principle.
- Atmospheric pressure decreases with increase in height. The SI unit of pressure is pascal which is named after Pascal who established this law.
8. Hooke’s Law (1635-1703)
This law states that the extension of a spring is proportional to the tension stretching it. Doubling of the tension results in the doubling of the amount of stretch.
9. Bernoulli's Principle
It states that as the speed of a moving fluid, liquid or gas, increases, the pressure within the fluid decreases. The aerodynamic lift on the wing of an aeroplane is also explained in part by this principle.
10. Boyles's Law
It states that temperature remaining constant, volume of a given mass of a gas varies inversely with the pressure of the gas.

11. Charles's Law
It states that pressure remaining constant, the volume of a given mass of gas increases or decreases by 1/273 part of its volume at 0 degree Celsius for each degree Celsius rise or fall of its temperature.
12. Kepler's Law
Each planet revolves round the Sun in an elliptical orbit with the Sun at one focus. The straight line joining the Sun and the planet sweeps out equal areas in equal intervals. The squares of the orbital periods of planets are proportional to the cubes of their mean distance from the Sun.
13. Law of conservation of energy
It states that energy can neither be created nor destroyed but it can be transformed from one form to another. Since energy cannot be created or destroyed, the amount of energy present in the universe is always remain constant.
14. Tyndall effect
The scattering of light by very small particles suspended in a gas or liquid.
15. Graham’s Law
It states that the rates of diffusion of gases are inversely proportional to the square roots of their densities under similar conditions of temperature and pressure.

Get the latest General Knowledge and Current Affairs from all over India and world for all competitive exams.
Comment (15)