JP Nadda (59-year-old) was elected as new President of the Bharatiya Janta Party (BJP), replacing Amit Shah. His name was proposed by ex-chiefs and parliamentary board members Amit Shah, Rajnath Singh, and Nitin Gadkari. The detailed description of JP Nadda's family, education and the political journey are provided in the article. 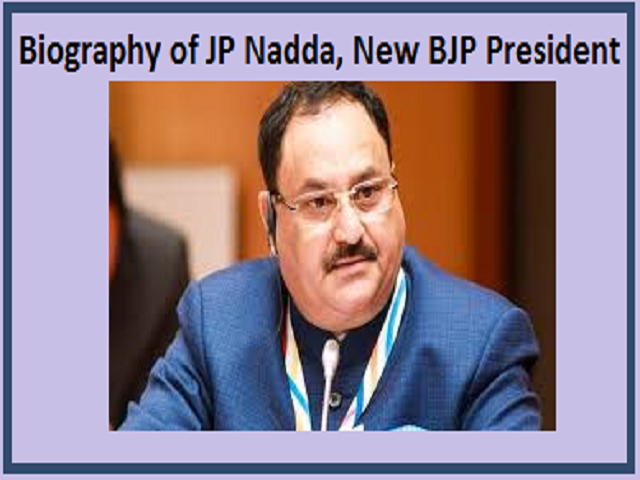 JP Nadda became the BJP's first working president and he was the health minister in the first term of the Modi government. On 20 January, 2020, top leaders were present at BJP house to file nominations in support of JP Nadda. During the first tenure of Narendra Modi as Prime Minister, he was the part of the Council of Ministers.

JP Nadda: Facts at a glance

Jagat Prakash Nadda (JP) is known as a master strategist in his party. He was BJP's National General Secretary and a Rajya Sabha MP from Himachal Pradesh.

JP Nadda was born on 2 December, 1960 in a Brahmin family. He did his schooling from St. Xaviers School, Patna. For B.A, he joined Patna College, Patna University and completed L.L.B from Himachal Pradesh University. When he was a child, he represented Bihar State by participating in the All India Junior Swimming Championship that was held in Delhi which shows his sportsmanship. He was married on 11 December, 1991 to Dr. Mallika Nadda and has two children. JP Nadda's mother-in-law, Smt. Jayshree Banerjee is a former Lok Sabha Member of Parliament.

In 1975, JP Nadda entered into politics by joining the ongoing Sampurna Kranti (total revolution) movement. It was started by the Jayaprakash Narayan (JP) against the autocratic rule of the then Prime Minister Indira Gandhi.

He entered into student politics by joining the Akhil Bharatiya Vidyarthi Parishad (ABVP). His father was a Vice-Chancellor of Patna University. In 1977, on a ticket of the ABVP, he won election as Secretary, Patna University student union. He was simultaneously got involved in the day-to-day workings of ABVP and worked on various positions.

He married to Dr. Mallika, the daughter of Lok Sabha MP from Jabalpur (Madhya Pradesh), Jayshree Banerjee. Dr. Mallika is a professor of History at the Himachal Pradesh University. She was also a member of ABVP and from 1988 to 1999; she was also its national general secretary.

He had faced detention of 45 days by organising an anti-government campaign in 1987 against the ruling Congress Party by establishing a Rashtriya Sangharsh Morcha.

During the Lok Sabha Election of 1989, he was provided with a major responsibility as an election in-charge of the BJP's youth wing. Do you know at that time he was just 29?

At the age of 31, he became the President of Bharatiya Janata Yuva Morcha in 1991.

Then he fought Lok Sabha elections from Himachal Pradesh, his home state and won three times. For three terms, he has been a Cabinet minister in the Himachal Pradesh from 1993 to 1998, 1998 to 2003 and from 2007 to 2012. He handled several ministries including Forest, Environment, Science and Technology.

He is also known for establishing forest police stations in the state to curb forest crimes.

He boosted the green cover in Shimla and for this, he launched several tree plantation drives in the state.

He got elected to Rajya Sabha in 2012. He was a member of the Committees on transport, tourism, and Culture.

We can say that JP Nadda is working for long and has strong roots with RSS. He was a cabinet minister from 1998 to 2003. He was also appointed as the working President of the BJP in June 2019 where Amit Shah remained BJP chief.

JP Nadda has decades-long experience in politics which will benefit the organisation and strengthen the image as BJP President.