Kapil Dev Biography: On this day, 37 years ago, India lifted its first-ever Cricket World Cup title, defeating West Indies in the final match by 43 runs at the Lord's under the captaincy of Kapil Dev. 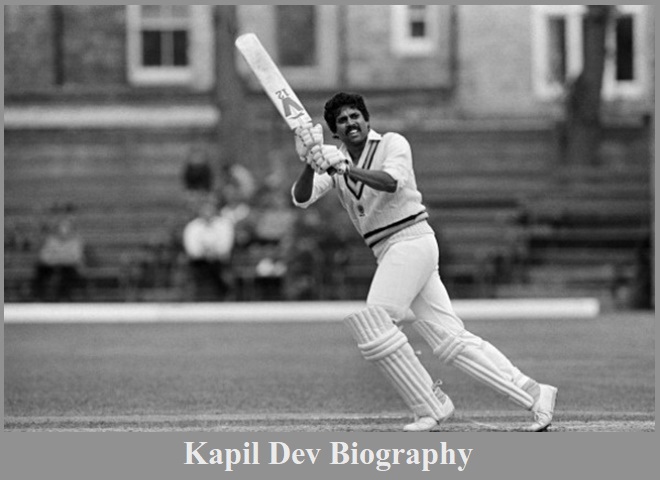 On this day, 37 years ago, India lifted its first-ever Cricket World Cup title, defeating West Indies in the final match by 43 runs at the Lord's under the captaincy of Kapil Dev. Kapil Dev is the greatest all-rounder India has produced. He is the only cricketer in the world to have scored all-rounder's double of 4,000 Test runs and 400 Test wickets in Test (international match) cricket.

Kapil Dev was born on January 6, 1959, to Ram Lal Nikhanj (father) and Raj Kumari Ram Lal Nikhanj (mother) in Chandigarh, India. His father was a timber merchant while his mother was a housewife. Kapil Dev was born in Pakpattan, Pakistan (town of Sufi Saint Baba Farid) while his father belonged to Dipalpur, Pakistan. After the partition, the family moved to Chandigarh. Kapil Dev studied at D.A.V. School and in 1971 joined Desh Prem Azad (Indian cricketer and Cricket coach).

Kapil Dev made his career debut in Cricket with Haryana against Punjab in November 1975. Haryana won the match and Kapil dev finished the season with 121 wickets in 30 matches.

In the 1976-1977 season, he played against Jammu and Kashmir. Haryana qualified for the pre-quarterfinals but lost to Bombay in the quarter-finals.

In the 1977–78 season, he played against services and scored 23 wickets in 4 matches. Dev was selected for the Irani Trophy, Duleep Trophy and Wills Trophy matches.

In the 1978–79 season, Kapil Dev stood out in Irani Trophy match where he scored 62 runs at number 8 order. His performance in the finals of Duleep Trophy was widely appreciated. He made a place in the North Zone squad for Deodhar Trophy and Wills Trophy and played his first Test Match in the season against Pakistan.

In 1979-80 season, he scored a maiden century (193) against Delhi. He captained Haryana for the first time against Uttar Pradesh and took five wickets to advance to quarterfinals, but lost to Karnataka.

The finals of this match against Bombay is still remembered as it had a number of international cricketers. Haryana team had Kapil Dev, Chetan Sharma, Ajay Jadeja and Vijay Yadav while Bombay team had Sanjay Manjrekar, Vinod Kambli, Sachin Tendulkar, Dilip Vengsarkar, Chandrakant Pandit, Salil Ankola and Abey Kuruvilla. The finals were won by Haryana and the only Ranji Trophy Championship where Dev played.

On October 16, 1978, Kapil Dev made his first Test Cricket debut against Pakistan. He took the wicket of Sadiq Mohammad with his trademark outswinger. He came to be known as an all-rounder after he scored India's fastest Test half-century in only 33 balls during 3rd Test Match at National Stadium, Karachi. Despite his record, India lost the match and series by 2-0.

In a series, at Feroz Shah Kotla, Delhi, he scored his maiden Test century (126 in 124 balls) against West Indies and took 17 wickets at 33 runs. In another series, he took 5-wicket against England, but England won the match. He finished the series with 16 wickets scoring 45 runs. He made his ODI cricket debut in Pakistan tour. His performance didn't improve and team India's performance was not impressive at 1979 Cricket World Cup.

In the home series, Dev took 5 wickets against Australia. In the series, he took 28 wickets and scored 212 runs, including a half-century. This series established him as India's premier fast bowler. In 6-Test series against Pakistan, he helped India win at  Wankhede Stadium, Bombay (scoring 69 runs) and at Chepauk, Madras (Now Chennai), 10-wicket haul in the match (4/90 in the first innings and 7/56 in the second innings and scored 84 runs in 98 balls). He set a record while playing the series to become the youngest Test player to achieve the all-round double of 100 Wickets and 1000 Runs and in 25 matches.

In 1980-81, during Australia tour, despite injuries, Dev played on the final day and India won the match. He also scored his first fifty in ODI against New Zealand at Brisbane, Australia.

After an unimpressive tour against Pakistan, Kapil Dev replaced Sunil Gavaskar as the Captian of Indian Cricket Team.

During his West Indies tour, Gavaskar (90) and Dev (72) led India to set a huge score of 282 against 2 wickets in just 47 overs. Indian won the match against West Indies.

In 1983 Cricket World Cup match, Yashpal Sharma scored 89 Runs while  Roger Binny and Ravi Shastri took 3 wickets each. This led to West Indies first ever defeat in World Cup. India won against Zimbabwe and lost the next two matches to Australia and West Indies. Thus, to advance to semi-finals, India needs to win against Australia and Zimbabwe.

On June 18, 1983, at  Nevill Ground against Zimbabwe, Dev holds a world record that stood for 27 years. He finished not out with 126 runs playing for the 9th wicket. Indian won the match by 31 runs.

India advanced towards semi-finals and played against England. India won against England and advanced to Finals against West-Indies. West Indies was hoping for a hat-trick of World Cup titles. When Viv Richards was at strike, he hit the ball aggressively that Kapil Dev caught at deep square leg after running back for over 20 yards. This is one of the finest catch in the World Cup history and was also a turning point in the 1983 World Cup Final. West Indies team was bowled out for 140 runs while India scored 183 runs.

After the World Cup, India hosted a Test and ODI series with West Indies and lost by 3-0 and 5-0 respectively. After this, Gavaskar replaced Dev as the captain in 1984.

In March 1985, Kapil Dev was reappointed and India won a Test series against England in the year 1986. He captained the Indian cricket team in the 1987 World Cup. India advanced to semi-finals but lost to England.  Kapil Dev retired in the year 1994.

After his resignation as India's National Cricket Coach, Kapil Dev returned to Cricket again as a bowling consultant. In October 2006, he was nominated as the chairperson of National Cricket Academy for 2 years.

In May 2007, he joined the Indian Cricket League (ICL) as the chairman of the executive board. ICL was funded by Zee TV. In June 2007, BCCI revoked the pensions of all the players who joined ICL, including Kapil Dev. On August 21, 2007, Kapil Dev was removed from the post of chairmanship of the National Cricket Academy. This was a day after he addressed a formal press conference of the newly formed ICL. On July 25, 2012, he resigned from ICL and continued extending his support to BCCI.

Post-retirement, Kapil Dev was appointed as coach of the Indian National Cricket Team in the year 1999. During his term as a coach, India won only a test match at home against New Zealand and witnessed two series losses against Australia and South Africa.

Manoj Prabhakar alleged Kapil Dev of Match-fixing, following which he resigned as the National Coach. The charges against him were later dismissed. He was succeeded by India's first foreign coach, John Wright, New Zealand batsman.

After his resignation as India's National Cricket Coach, Kapil Dev returned to Cricket again as a bowling consultant. In October 2006, he was nominated as the chairperson of National Cricket Academy for 2 years.

On September 24, 2008, Kapil Dev joined the Indian Territorial Army. Chief of the Army Staff, General Deepak Kapoor, commissioned him as a  Lieutenant Colonel. Dev joined the army as an honorary officer.

In 2019, Kapil Dev was appointed as the first chancellor of the Sports University of Haryana.

1- In 1994, he broke the record held by Sir Richard Hadlee, becoming the highest Test wicket-taker in the world. Later in 1999,  Courtney Walsh broke Kapil Dev's record.

2- The only player in the world to have achieved all-rounder's double of 4,000 Test runs and 400 Test wickets.

2- On March 22, 1985, peak rating (631), highest ever achieved after a World Series final against Pakistan in Australia.

3- Highest ODI score batting in number 6 order in World Cup history-- 175 Not Out.

4- The most number of balls in an ODI inning when batting at number six position in ODI history. The record was tied with Neil McCallum-- 138 balls.

9- Honoured with the rank of Lieutenant Colonel by Indian Territorial Army in 2008.

Kapil Dev has so far written 4 books. These are: