At present, NATO Member States comprises 30 countries from the original 12 countries that signed the North Atlantic Treaty on 4 April 1949. Check the complete NATO countries list below.

List of NATO Member States: The North Atlantic Treaty Organization (NATO) was created in 1949 by the United States, Canada, and other western European nations to provide collective security against the Soviet Union. NATO constitutes a system of collective security, whereby its independent member states agree to mutual defence in response to an attack by any external party.

Article Five of the North Atlantic Treaty states that if an armed is carried out against one of the member states of NATO, it shall be considered an attack against all the member states, and other members shall assist the attacked member, with armed forces if necessary.

North Macedonia is the latest country to join NATO member states while Bosnia and Herzegovina, Georgia and Ukraine are aspiring members of NATO.

At the heart of the ongoing war between Ukraine and Russia is NATO. Russia doesn't want Ukraine or any other ex-Soviet Nation to be a part of NATO. Taking a stand on the ongoing crisis, NATO said that it would take new deterrence and defence steps after the Russian invasion of Ukraine. NATO will be put over 100 warplanes on high alert and further increase the presence of troops on its eastern flank. NATO secretary-general Jens Stoltenberg said there would be a virtual emergency summit on Friday.

"Peace on our continent has been shattered. Russia is using force to try to rewrite history, and deny Ukraine its free and independent path," said NATO secretary-general Jens Stoltenberg. He added, "We have no plans to send Nato troops in Ukraine. What we do is defensive." 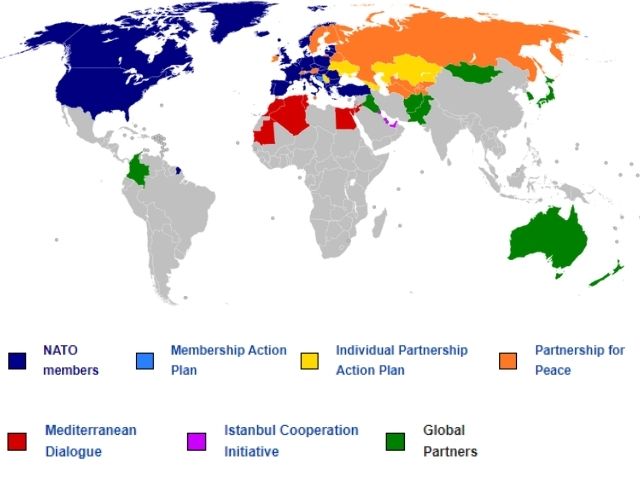 The NATO headquarters are located in Brussels, Belgium, while the headquarters of Allied Command Operations is near Mons, Belgium.

Also Read | What is the difference between NATO and CSTO?

What does NATO stand for?

NATO stands for North Atlantic Treaty Organization which was created in 1949 by the US, Canada, and other western European nations to provide collective security against the Soviet Union.

Is India part of NATO?

No, India is not part of NATO Member States.

How many countries are in NATO?

At present, NATO comprises 30 countries from the original 12 countries that signed the North Atlantic Treaty on 4 April 1949.
Get the latest General Knowledge and Current Affairs from all over India and world for all competitive exams.