India's art and culture are represented by its many monuments located around the country. We bring to you the top 10 most famous, visited monuments which are also listed by UNESCO in its World Heritage Sites List

India has many monuments in its periphery. These monuments are the cultural heritage of India since time immemorial and mark the presence of India on a global map. Take a look at the most beautiful famous monuments in India.

If its India, it is Taj Mahal. India is known by the name of this Wonder of the world. This architectural marvel was built by Shah Jahan for his wife Arjumand Banu Begum, popularly known as Mumtāz Mahal in between 1631 to 1648. It has almost 8 million visitors every year.

Location: It is situated on the banks of River Yamuna in Agra, Uttar Pradesh.

Builder: Shah Jahan was a Mughal Dynasty ruler, the son of Jehangir and the father of the last famous Mughal ruler, Aurangzeb.

It is said that the emperor lost his empire to his son Aurangzeb and was conquered in the Agra Fort from where he used to visualize the Taj Mahal from a very small window in his jail.

The austere and grand site of Hampi is basically the remnants of the Capital City of the Vijayanagara Empire. It was a flourishing city during the 14th-16th Cent CE and also one of the last great Hindu Kingdoms in the Indian subcontinent. The monuments are a part of UNESCO's world heritage site and cover an area of 4187, 24 hectares.

Location:  It is located in the Tungabhadra basin in Central Karnataka, Bellary District. 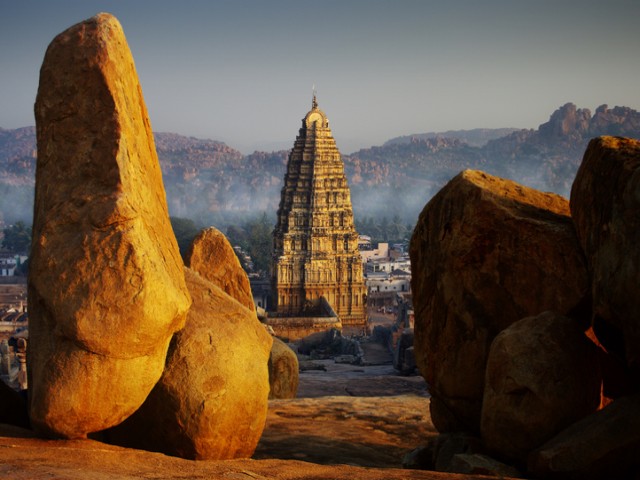 The Sun Temple is one of the major attraction of the eastern coast of India. This temple is dedicated to the Sun King or Lord Surya Dev and was built in the 13th century. This temple is also listed in the UNESCO World Heritage sites due to its architecture and Inscriptions.

Khajuraho has a group of temples which are divided into three parts on the basis of their locations that is Western, Eastern, and Southern group temples. It is well known for its exotic sculptures. These group of temples was built in the 11th century. Khajuraho temples are a well known UNESCO World Heritage Sites due to the architectural wonder.

This is a famous UNESCO World Heritage Site from Maharashtra. The rock-cut activity was carried out in three phases from the 6th century to the 12th century.

The very first Buddhist cave monuments at Ajanta were built during the 2nd and 1st centuries B.C. During the Gupta period that lasted from 5th to 6th centuries A.D. various other caves were added to the original group. The paintings and sculptures of Ajanta, considered masterpieces of Buddhist religious art, have had a considerable artistic influence.

Humayun's tomb was built in 1570 AD. It is unique as it was the first garden-tomb on the Indian subcontinent. This tomb is the reason for several major architectural innovations, culminating in the construction of the Taj Mahal.

Also read| What is Paris Agreement? What has changed so far in five years?

The Great Living Chola Temples were built by kings of the Chola Empire and they stretched over all of south India and the neighbouring islands. The main attraction is the three 11th- and 12th-century Temples.

Rajasthan is famous for its forts and the Rajput kings. The hill forts of Rajasthan are known for the architectural styles and bravery of Rajput rulers. These are recognized by UNESCO World Heritage Site.

The Rock Shelters of Bhimbetka are located in the foothills of the Vindhyan Mountains on the southern edge of the central Indian plateau.

India is full of culture and art which is significant through its ancient buildings and monuments. The cultural heritage of the country and its history is recognized throughout the world due to the preservation and upkeep of the monuments we have.

Also Read| What is the difference between ISRO and DRDO

Who was the first architect in India?

Balkrishna Vithaldas Doshi is called the first architect of India

Which is the oldest monument in the world?

Which Indian city has most monuments?

The national capital of India, Delhi has 174 monuments in its circumference. This makes it the city with the highest number of monuments

Taj Mahal, built by Shah Jahan is one of the seven wonders of the world and is in UNESCO world heritage list