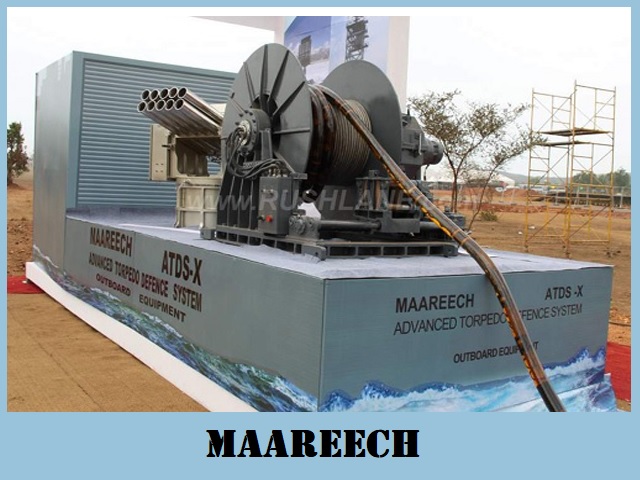 On June 26, 2020, Indian Navy inducted an advanced anti-torpedo decoy system-- Maareech. This system is capable of being fired from all frontline ships.

DRDO (Defence Research and Development Organization) has designed and developed Maareech. It can detect, locate, divert and neutralize incoming torpedo.

As per a press release by Indian Navy, a prototype of this system which was installed on a nominated naval platform has completed all user evaluation trials and demonstrated the features as per the Naval Staff Qualification Requirements.

The induction of this system testifies the joint efforts by the Indian Navy and DRDO towards indigenous development of defence technology. In addition to this, it also added a feather in the government's 'Make in India' initiative and is in the direction to become 'Aatma Nirbhar' or 'self-reliant' in niche technology.

What is an Advanced Torpedo Defence System?

Maareech is an advanced Anti-Torpedo Decoy System and works mainly on:

1- Hull mounted SONAR: It detects and locates enemy torpedoes and send its location and other information to the processor unit.

2- Towed Decoy and Winch System: It is an additional decoy in the Maareech having a long array of decoys which are about 100 m long. This array is released in the ocean with the help of a winch system and is mounted on the ship.

3- Expendable Decoy: It launches multiple expendable decoys which generates low-frequency signals as that of warship engine. This creates confusion about the actual location of the warship.

The expendable and towed decoys force incoming torpedo to move in a circular path in search of warship and thus exhausts its energy by running through long and ineffective courses. This principle prevents the enemy from a torpedo from detecting the exact location of the warship.

History of Induction of Maareech:

In November 2015, the first Maareech ATDS system was inducted in the Indian Navy by the then Defence Minister, Manohar Parrikar. Currently, this system is used in INS Kolkata and INS Chennai warships of Indian Navy.

Torpedo is an underwater ranged weapon which can be launched either above or below the surface of the water. The weapon is self-propelled towards a target and has an explosive warhead designed to detonate either on contact with or in proximity to the target.

Torpedoes are propelled by motors and work for about 10-20 minutes. After this period, they lose their system and sink in the ocean beds.

A modern torpedo can be launched from a variety of platforms and can be divided into two broad categories-- lightweight and heavyweight. It can be further divided in straight running, autonomous homers and wire-guided.

IAF inducts LCA Tejas: All you need to know about the 18 Squadron aircraft