Punjab Maharashtra Co-operative Bank is a Scheduled Commercial bank situated in 6 states of the country. This bank was established on February 13, 1984 as a single branch Bank. In a span of 35 years, the Bank has a wide network of 137 branches across six states. This bank has total deposits of about Rs 11,617.34 crore. 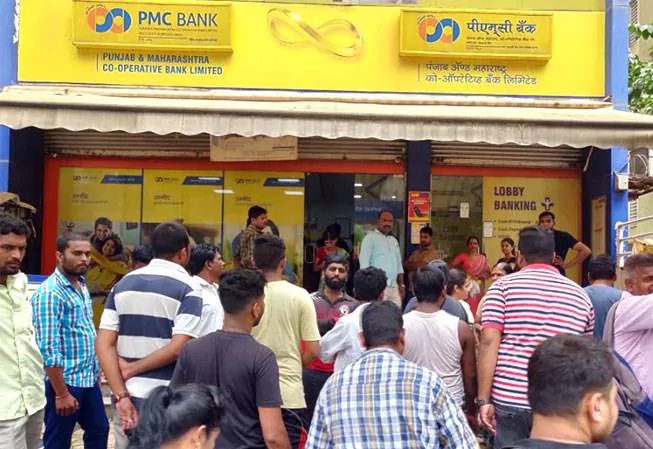 Customers at the PMC Bank's branch

Indian banking system is passing through a tough time. The banking sector has huge Non Performing Assets (NPA). In this tough time another bank fraud came in the light in the name of Punjab & Maharashtra Cooperative (PMC) Bank.

This bank was established on February 13, 1984 as a single branch cooperative Bank. Punjab & Maharashtra Cooperative (PMC) Bank is a Scheduled Urban Co-operative Bank with its area of operation in the States of Maharashtra, Gujarat, Delhi,Goa, Karnataka, Madhya Pradesh and Andhra Pradesh.

The commencement of the banking business of PMC taken place on February 13,1984. It operated nicely and within a time of 35 years, the Bank has a wide network of 137 branches across six states.

PMC has 1814 number of employees and now this bank stands among top 10 co-operative banks of the country.

At the time of its establishment PMC was a cooperative bank but in 2000 it got the status of Schedule Commercial Bank by the the Reserve Bank of India. PMC is the youngest bank to achieve the ‘Scheduled Bank’ status.

Detail of the Bank fraud;

The crux of this bank fraud is that the higher management of the PMC bank has given huge loan to the Housing Development and Infrastructure Ltd (HDIL) and its group entities. This fraud case is related to transfer of 70% of the total credit facilities of the PMC bank to HDIL and its associated companies. If i talk about the total amount of the bank fraud then it was Rs 4,355 cr. Now the total NPA of the bank has grown to 73%.

The PMC bank allegedly favoured to the promoters of Housing Development and Infrastructure Ltd (HDIL) and allowed them to operate password protected ‘masked accounts’.

This bank fraud case is busted by a bunch of women employees of the credit department of the PMC bank. These employees told to the RBI that they were aware of the ghost accounts. When this case came in the light; then customers of the PMC bank rushed to the PMC bank to withdraw their hard earned money but they were refused to give their deposited money and withdrawal limit is set by the bank.

Now the Enforcement Directorate (ED) has sealed the assets of Rs 3,500 cr of the HDIL group and the HDIL chief Rakesh Wadhawan and his son Sarang Wadhawan have been arrested by the Mumbai Police.

Now it the need of the hour that the central government need to make some strict policies to prevent such banking frauds in the country. The most important measure I would suggest is to restrict the political intervention in the functioning of the Indian banks.

What are the main functions of Reserve Bank of India?