The Shanghai Cooperation Organisation (SCO) 19th summit is in the Kyrgyzstan capital, Bishkek on 13-14 June, 2019. Let us tell you that the SCO is the intergovernmental permanent organisation created in 1996. A lot more to read about SCO 2019 summit, its agenda and why its membership is crucial for India.

The founding members of Shanghai Cooperation Organisation (SCO) are China, Russia, Kazakhstan, Kyrgyzstan and Tajikistan. India and Pakistan officially joined this organisation in 2017. Prime Minister Narendra Modi, Chinese President Xi Jinping, Russian President Vladimir Putin, Pakistan Prime Minister Imran Khan and other leaders would also attend the summit. The SCO summit will be the first major international event which will be attended by Narendra Modi after his re-election.

On the sidelines of Shanghai Cooperation Organisation (SCO) summit in Bishkek, India will hold bilateral meetings with Russia and China. On 14 June, India would also hold a meeting with host nation Kyrgyzstan. Moreover, India announced that Narendra Modi will not take the Pakistani air space for flying to the SCO summit in Bishkek in Kyrgyzstan and instead he will fly by the circuitous route through Oman and Iran.

For SCO summit, particular agenda is not set beforehand but below mentioned issues can be discussed as per the sources.
- In the meeting review of the past years work of the grouping and will also draw new plan for cooperation this year.

- Security and development are two major issues to be discussed mainly how to counter terrorism.

- Issues like multilateralism protectionism in the context of US trade tensions could also be discussed.

- China-US trade war and the "spectre" of emerging trade frictions between the US and India.

- India will also increase cooperation between SCO and other multilateral organisations besides agreeing to focus on illegal drug trafficking, cooperation in information technology, environment, healthcare and sports.

So, we can say that main issues that are to be focused on global security situation, multilateral economic cooperation, people-to-people exchanges and topical issues of international and regional importance.

Do you know about RATS Council?

The Regional Anti-Terrorist Structure (RATS) of the SCO is a permanent organ to promote cooperation of member states against terrorism, separatism and extremism. In June 2004, RATS was established. The first joint military exercise of SCO namely Sary-Arka-Antiterror 2019 was announced during 34th meeting of RATS council held in Tashkent, Uzbekistan. All the SCO members of SCO participated in a joint counter-terrorism exercise.

SCO was founded in Shanghai by the leaders of China, Russia, Kazakhstan, Kyrgyzstan and Tajikistan in 2001. It is a Eurasian political, economic and military organisation. 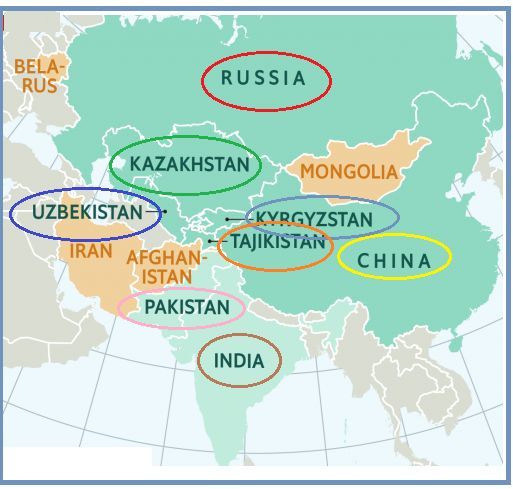 Why membership of SCO is crucial for India?

It is seen that SCO is an eastern counter-balance to NATO. Being India as its member will allow the country to take an effective action in combating terrorism and security related issues as well. As India and China are most populous countries so, now the SCO also has the largest population coverage. After joining India to SCO it is expected that there will be rise in the regional politics group's and trade negotiations.

Note: Last year that is in 2018 the SCO summit was held in Qingdao, China. And in 2020 it will be going to held in Chelyabinsk, Russia.

How Indian Diplomacy trapped the Pakistan?