Reserve Bank of India is the Central Bank of our country. It was established on 1st April 1935 under the RBI Act of 1934. It holds the apex position in the banking structure. RBI performs various developmental and promotional functions. As of now 26 public sector banks in India out of which 21 are Nationalised banks and 5 are State Bank of India and its associate banks. There are total 92 commercial banks in India. Public sector banks hold near about 75% of the total bank deposits in India.

The Indian banking industry has its foundations in the 18th century, and has had a varied evolutionary experience since then. The initial banks in India were primarily traders’ banks engaged only in financing activities. Banking industry in the pre-independence era developed with the Presidency Banks, which were transformed into the Imperial Bank of India and subsequently into the State Bank of India.

The initial days of the industry saw a majority private ownership and a highly volatile work environment. Major strides towards public ownership and accountability were made with Nationalisation in 1969 and 1980 which transformed the face of banking in India. The industry in recent times has recognised the importance of private and foreign players in a competitive scenario and has moved towards greater liberalisation.

Structure of Indian Banking System is as Follows: 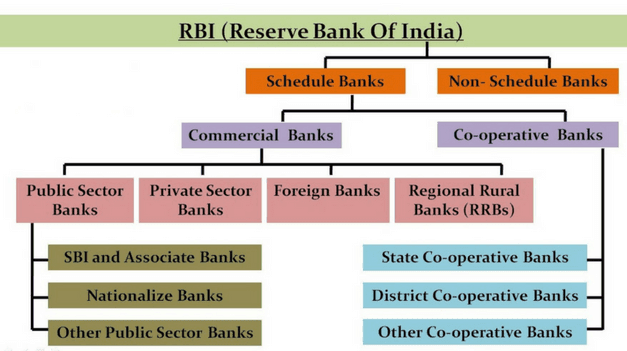 What salary/perks enjoyed by RBI Governor?

In the evolution of this strategic industry spanning over two centuries, immense developments have been made in terms of the regulations governing it, the ownership structure, products and services offered and the technology deployed. The entire evolution can be classified into four distinct phases.

Reserve Bank of India is the Central Bank of our country. It was established on 1st April 1935 accordance with the provisions of the Reserve Bank of India Act, 1934. It holds the apex position in the banking structure. RBI performs various developmental and promotional functions.

It has given wide powers to supervise and control the banking structure. It occupies the pivotal position in the monetary and banking structure of the country. In many countries central bank is known by different names.

For example, Federal Reserve Bank of U.S.A, Bank of England in U.K. and Reserve Bank of India in India. Central bank is known as a banker’s bank. They have the authority to formulate and implement monetary and credit policies. It is owned by the government of a country and has the monopoly power of issuing notes.

Commercial bank is an institution that accepts deposit, makes business loans and offer related services to various like accepting deposits and lending loans and advances to general customers and business man.

These institutions run to make profit. They cater to the financial requirements of industries and various sectors like agriculture, rural development, etc. it is a profit making institution owned by government or private of both.

Currently there are 21 Nationalised banks in India. The public sector accounts for 75 percent of total banking business in India and State Bank of India is the largest commercial bank in terms of volume of all commercial banks.

Now from April 1, 2017 all the 5 associate banks of SBI and Bhartiya Mahila Bank are merged with State Bank of India. After this merger now SBI is counted among the top 50 largest banks of the world.

What is the Intake of Government in the Public Sector Banks of India?

A foreign bank with the obligation of following the regulations of both its home and its host countries. Loan limits for these banks are based on the capital of the parent bank, thus allowing foreign banks to provide more loans than other subsidiary banks.

Foreign banks are those banks, which have their head offices abroad. CITI bank, HSBC, Standard Chartered etc. are the examples of foreign bank in India. Currently India has 36 foreign banks.

The government of India set up Regional Rural Banks (RRBs) on October 2, 1975. The banks provide credit to the weaker sections of the rural areas, particularly the small and marginal farmers, agricultural labourers, and small entrepreneurs. There are 82 RRBs in the country. NABARD holds the apex position in the agricultural and rural development. List of some RRBs is given below:

Name of some co-operative banks India are:

i. State cooperative bank at the apex level.

iii. Primary cooperative banks and the base or local level.

The scheduled banks are those which are enshrined in the second schedule of the RBI Act, 1934. These banks have a paid-up capital and reserves of an aggregate value of not less than Rs. 5 lakhs, they have to satisfy the RBI that their affairs are carried out in the interest of their depositors.

All commercial banks (Indian and foreign), regional rural banks, and state cooperative banks are scheduled banks. Non- scheduled banks are those which are not included in the second schedule of the RBI Act, 1934. At present these are only three such banks in the country.