What is the difference between RuPay Card, VISA Card and MasterCard?

Have you ever noticed that on the credit or debit card, RuPay card or Visa, or MasterCard is written, even if we have taken it from any bank? Why is it so, what is the difference between them, whether RuPay Card can be used internationally or not, etc? Let us study through this article.

Nowadays, we want to make all cashless or online payments in the digital era and for this, we either use a credit card or debit card. But have you ever noticed that on the credit or debit card RuPay Card, Visa Card, or MasterCard is written, even if we have taken it from any bank? Let us find out from this article about the difference between RuPay cards, Visa cards, and MasterCard.

Do you know that on March 2012, the National Payments Corporation of India (NPCI) launched the RuPay Card? The government launched it in an effort to promote the causes of financial inclusion in the country. RuPay is India's own domestic network, which has been developed like international payment networks such as Visa, MasterCard, Discover, Dinner Club, and American Express.

Earlier people used to go to the bank to withdraw money, bear long-range lines, and also face many problems. Keeping all this in mind, the bank implemented a credit or debit card to withdraw money from ATM machines, and to get the ATM Card the applicant needs to apply for it. After applying whether for a debit or credit card, the bank offers 3 types of ATM cards i.e. RuPay Card, Visa Card, or MasterCard. Now people have started withdrawing money from ATM machines without going to the bank. So, we can say that these cards are a type of Payment Gateway Card.

What is plastic money?

When we use any type of ATM card for the transaction at the place of hard cash, this card is known as plastic money and the transaction resulting from it is called cashless payment. It can be done via any ATM, Visa Card, MasterCard, or RuPay Card.

What is RuPay Card? 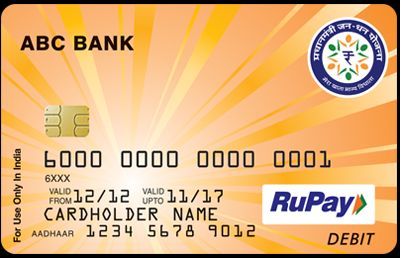 Rupay Card is an Indian domestic card conceived and launched by NPCI in 2012. It was introduced in the Indian payment system to reduce the monopoly of foreign gateways like Visa and MasterCard because these are foreign companies or American companies and their commission is high i.e. the cost of transaction is high. Therefore, we can say that RuPay Card is an Indian payment gateway. It also works like Visa or Master Card and its commission is low. RuPay facilitates electronic payment at all Indian banks and financial institutions.

Do you know that all major public sector banks, including SBI, have started issuing RuPay cards to all their customers? Also, it has come up with a high-end technology chip named EMV (Europay, MasterCard, and Visa), especially for high-end transactions. A microprocessor circuit is also embedded in it with information about the cardholder.

What is depicted by 16 digits printed on Debit Card?

What is Visa and MasterCard?

Visa Card and MasterCard are foreign payment gateway that provides payment facility to most of the banks in the world. There is no special difference between MasterCard and Visa cards. Both of these are ATM cards and their work is similar. They are international cards; payment can easily be done everywhere.

However, neither Visa nor MasterCard actually provides any credit card to anyone. These are both payment methods. They rely on banks in different countries to issue credit cards using payment methods. Therefore, interest rates, rewards, annual fees, and all other charges are issued by the bank and so, when you pay your bill, you are paying it to the bank or institution issuing your card, Visa, or MasterCard.

Now let us study the difference between Rupay Card, Visa Card, and MasterCard.

1. RuPay Card is an Indian Domestic Debit Card whereas Visa or MasterCard is an International System debit card.

2. The main difference between RuPay, MasterCard, and Visa Debit Card is the operating costs. Since every transaction through RuPay will take place within India, the banks will have to pay less service charges to the payment gateway as compared to Visa, and MasterCard.

Note: As mentioned above, a RuPay card has been created for domestic use, so it cannot be used at international level transactions such as Visa or MasterCard.

4. Banks are required to pay a quarterly fee for joining a foreign payment network such as Visa Debit Card or MasterCard but do not have to do so in RuPay Card. Any bank can join the RuPay network at no charge.

5. There are some limitations to using the RuPay card because it provides only a debit card for online transactions, whereas Visa or MasterCard provides both a debit and credit card.

6. As, compared to an international card, RuPay cards are more secure because their operations are limited to India only. Therefore, data is shared between national gateways only. But using Visa Debit Card or MasterCard, the customer's data are processed internationally, and hence the risk of data theft is high.

7. In the case of international cards, banks have to pay entry fees to be a part of their network which is not the case with RuPay cards i.e. no joining fee for the banks.

8. RuPay card is offered by the public sector, select private banks, and rural and cooperative banks whereas others don’t include such small banks in their network.

What are the key features of Payments Banks in India?