Presently the World Bank is playing a crucial role in providing loan to developing countries for the development projects. The World Bank provides loans for various projects ranging from poverty alleviation to infrastructural development for the long term period of 5 to 20 years.

The World Bank Group has 189 member countries, staff from more 170 countries and offices in over 130 locations.

As per the information available on the website of the World Bank, IBRD is funding 13,229 projects in 173 countries of the world. India is not behind in this race and more than 783 projects of India are funded by the World Bank.

The World Bank Group composes of the 5 institutions i.e. IBRD, IFC, IDA, MIGA and ICSID. International development organisation (IDA) is the associate association of the World Bank's, known as the soft loan window. It provides loans to poor countries at very low rate of interest.

How much loan is given by the World Bank?

The lending terms are determined with reference to recipient countries. World Bank decides the loan to a country on the basis of 3 criterion;

2. The level of GNI Per Capita

3. Creditworthiness for the International Bank for Reconstruction and Development (IBRD) borrowing.

What are the eligibility criteria for IDA loan?

Eligibility for IDA loan depends first and foremost on a country’s relative poverty, defined as GNI per capita below an established threshold and updated annually ($1,165 in fiscal year 2018). As of now 75 countries are currently eligible to receive IDA resources.

Some countries such as Nigeria and Pakistan are eligible for IDA loan based on Per Capita Income levels and are also creditworthy for some IBRD borrowing. They are referred to as “Blend” Countries.

Rate of interest charged for different countries are as follows; 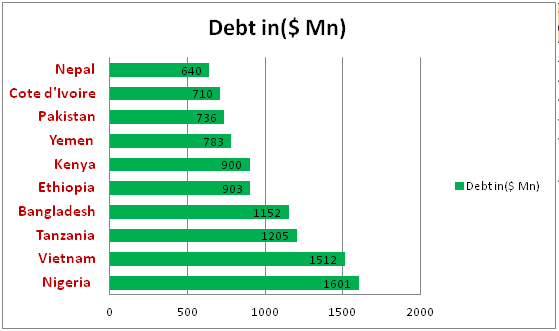 The above list shows that all the countries mentioned above are developing countries. The table shows that now India is the second largest borrower from the World Bank Group. Earlier India used to get loan from the International Development Association (IDA) which provides loans at very cheaper rates to only those countries which are considered as the poorest countries of the world like Sudan and Somalia and other African countries etc. Here worthy to mention that Pakistan is still eligible to get loan under the IDA norms.

International Bank for Reconstruction and Development or World Bank