With Samsung, Oppo, LG, Xiaomi and Oneplus already sat afoot in the 5G technology, Apple iPhone 12 with 5G is all set to make its debut anytime soon. Check details on expected price, features and release date.

After Samsung, Oppo, LG, Xiaomi and Oneplus launched 5G enabled smartphones in the market, Apple is sluggishly crawling the same queue by introducing its very first 5G enabled smartphone. But the U.S. giant Apple has not yet officially announced the release date of the 5G phone, hence the market is just speculating about the exact launch month and year.

Sub-6ghz 5G can provide download speeds better than the current 4G LTE networks, while mmWave 5G can offer speed 10 times faster. However, MmWave has shorter ranges than sub-6ghz, making the faster technology more applicable for use in cities.

As per rumors, the Apple iPhone with 5G technology will come with the triple rear camera. Also, all iPhones launching in 2020 are expected to feature OLED displays regardless of price.

On the design front, rumors suggest at least one of the new iPhones will feature a significant redesign with a metal frame that's similar to the frame of the discontinued iPhone 4. 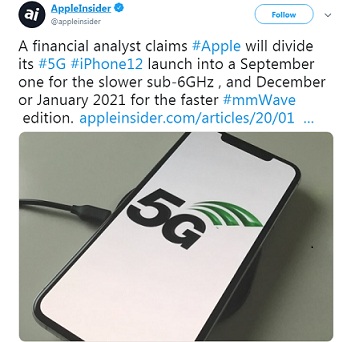 Traditionally, Apple announces its new launches in the month of September every year. In 2019, the brand launched iPhone 11, iPhone 11 Pro and iPhone 11 Pro Max with faster processors, better optics and longer battery life than its previous versions.

As per the statement made by Mehdi Hosseini the 5G models using sub-6ghz technology can be launched in September while the faster mmWave 5G iPhones can be rolled out in December 2020 or January 2021.

However, the tradition doesn’t confirm if the brand will launch the 5G phone in the same month this year. Until the official announcement made by the brand all we have is a skeptic outlook over the release date.