CBSE Class 12th Chemistry Examination 2020 is scheduled on March 7, 2020. The students appearing for the upcoming examination will find the below-mentioned article on important questions helpful. These questions and answers are strictly base on the latest syllabus prescribed by the CBSE Board.

Question 3- Draw the structures of white phosphorus and red phosphorus. Which phosphorus is more reactive and why?

White phosphorus is more reactive as it has discrete tetrahedral structure and angular strain.

(b) SF6 is kinetically an inert substance.

(c) All the P-Cl bonds in PCl5 molecules are not equivalent.

(d) Sulphur has a greater tendency for catenation than oxygen.

(b) SF6 is kinetically an inert substance as it shows steric hindrance due to 6 fluorine atoms, hence, it is unable to react further with any other atom. 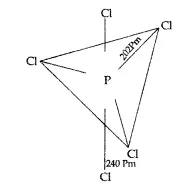 (d) Sulphur has a greater tendency for catenation than oxygen as the lone pair of electrons feel more repulsion in O-O Bond than in S-S Bond. Also, when the size of an atom increases down the group from O - PO, the catenation tendency increases due to the increase in the bond strength.

a) O2 and F2 both stabilize higher oxidation states of metals but O2 exceeds F2 in doing so.

(b) Structures of Xenon fluorides cannot be explained by Valence Bond approach.

(c) NF3 is an exothermic compound whereas NCl3 is not.

(d) Xenon is known to form real chemical compounds out of all noble gases.

(e) NO2 readily forms a dimer.

Answer: (a) O2 and F2 both stabilize higher oxidation states of metals but O2 exceeds F2 in doing so because oxygen can form multiple bonds with metals.

(d) Xenon is known to form real chemical compounds out of all noble gases because Xenon atoms have a large size and lower ionisation potential. The force of nucleus over the electrons is weak and a very small amount of energy can excite the electrons.

(e) NO2 readily forms a dimer as it contains 23 odd electrons. N has seven electrons in the valence shell and is less stable. It dimerizes to form N2O4 in order to acquire stability.

(a) Which form of sulphur shows paramagnetic behaviour and why?

(c) The electron gain enthalpy of sulphur atom has a greater negative value than that of the oxygen atom.

(d) Nitrogen does not form pentahalides.

(e) In aqueous solution, HI is a stronger acid than HCl.

(f) Elements of Group16 generally show the lower value of first ionization enthalpy compared to the corresponding periods of Group 15.

Answer: (a)  Sulphur shows paramagnetic behaviour as in vapour state sulphur partly exists as S2 molecule which has two unpaired electrons in the antibonding π* orbitals like O2.

(b) Fluorine exhibits only -1 oxidation state whereas other halogens exhibit +1, +3, +5 or +7 oxidation states also as fluorine does not have d-orbitals and it is the most electronegative element.

(c) The electron gain enthalpy of sulphur atom has a greater negative value than that of oxygen atom as the enthalpy of dissociation of S - S bond is greater than O - O bond. Also, O2- ion has more hydration energy than S2- ion.

(d) Nitrogen does not form pentahalides because it does not have empty d-orbitals.

(e) In aqueous solution, HI is a stronger acid than HCl because of its lower bond dissociation energy and a higher degree of ionization.

Question 7- How is XeO3 obtained? Write the related chemical equations. Draw its structure.

Answer: Hydrolysis of XeF4 and XeF6 with water gives XeO3

Question 8- What happens when:

Answer: (i) On heating PCl5 decomposes into PCl3 + Cl2

(ii) Orthophosphorous acid on heating disproportionates to give orthophosphoric acid and phosphine.

Question 9- Arrange the following in the order of property indicated against each set :

(i) HCl is a stronger acid than HF though fluorine is more electronegative than chlorine.

(ii) Decomposition of ozone molecule is a spontaneous process.

(iii) SF6 is inert towards hydrolysis.

Therefore, according to VSEPR theory, it should have a linear structure.

No noble gas has 22 electrons

∴ The isoelectronic species for IBr2 - is XeF2

(ii) BrO3–: It has 3 bond pairs and 1 lone pair of electrons. Therefore, according to VSEPR theory, it has a pyramidal structure. 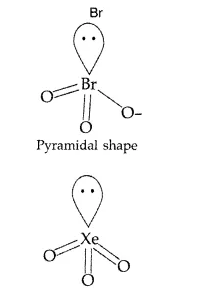 (b) (i) Because HCl has a large size and less bond strength than HF which makes it an easier liberation of H+.

(ii) Decomposition of ozone molecule is a spontaneous process as O3 is thermodynamically unstable and its decomposition results in the liberation of heat (ΔH is -ve) and increase in entropy (ΔS is +ve) so (ΔG becomes -ve and process becomes spontaneous).

(iii) SF6 is inert towards hydrolysis because S is protected by 6F atoms and does not allow H2O molecules to attach on it.

(iv) Chlorine water loses its yellow colour on standing due to the formation of HCl and HOCl. HOCl is unstable and decomposes to HCl.

The questions in this article are based on NCERT textbook, previous year question papers and previous year sample papers. In addition to this, the students can also go through the links mentioned below to prepare for the upcoming examination: