Jagranjosh. com presents CBSE class 12 physics practice paper 2017. Students who are going to appear in CBSE 2017 board exam can take help of this practice paper.

The questions from the complete practice paper are given below:

Q: What is the relation between electric current (I) and drift velocity (vd) of electrons?

Q: Prove that (volt/metre) and (newton/coulomb) are the units of the same physical quantity.

Q: Give two examples of Paramagnetic and Ferromagnetic materials?

Q: Name the network formed by joining 4 to 6 computers in an office?

Q: Figure given below shows four  lines passing through a metallic triangular lamina. Which one of the following four lines is shown correctly? 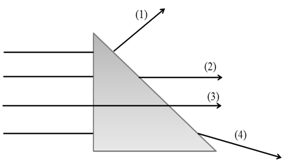 Q: How focal length of the lens will change if the red light incident on it replaced by violet light? Give reasons for your answer.

Q: In a CE transistor amplifier, current and voltage gain are associated with the circuit. In other words there is a power gain. With reference to the power (a measure of energy), does the circuit violate conservation of energy?

Q: The refractive index of a medium with respect to air is √3. What is the angle of refraction, if the unpolarized light is incident on it at the polarizing angle of the medium?

Q: What do you understand by resolving power of an optical instrument? Suppose a light of wavelength 3000 angstrom is coming from a star. What is the limit of resolution of a telescope whose objective has a diameter of 254 cm?

Q: With the help of Bohr’s second postulate show that the electron revolves around the nucleus only in certain fixed orbits without radiating energy can be explained on the basis of de-Broglie hypothesis of wave nature of electron.

Q: What is rectifier? Draw a circuit diagram of a full-wave rectifier. Explain its working principle.

Q: What are the two basic modes of communication? Explain the process of amplitude modulation. Draw a schematic sketch showing how amplitude modulated signal is obtained by superposing a modulating signal over a sinusoidal carrier wave.

Q: (i) Prove that an ideal capacitor, in an AC circuit does not dissipate power.

(ii) Derive an expression for the impedance of an AC circuit consisting of an inductor and a resistor.

Q: Explain how a Zener diode can be used as a voltage regulator with a circuit diagram.

Q: Find the type of waves which are produced by ways given below and also write one application for each:

(i) Radioactive decay of the nucleus,

(ii) Rapid acceleration and decelerations of electrons in aerials,

(a) Will it behave as a diverging lens or a converging in the two cases?

(b) How will its focal length change in the two media?

Q: (i) Using de Broglie’s hypothesis and a suitable diagram, explain Bohr’s second postulate of quantization of energy levels in a hydrogen atom.

(ii) The ground state energy of hydrogen atom is –13.6 eV. What are the kinetic and potential energies of the electron in this state?

Q: Using Ampere's circuital law, derive an expression for the magnetic field along the axis of a toroidal solenoid.

Q: State Kirchhoff’s laws. On which principle they are based. Using both laws find the value of currents I1, I2 and I3 in the circuit diagram shown below:

Q: A thin conducting spherical shell of radius R has charge Q spread uniformly over its surface. Using Gauss’s law, derive an expression for an electric field at a point outside the shell. Draw a graph of electric field E(r) with distance r from the centre of the shell or 0 ≤ r ≤ ∞.

Q: Anita and her friends visited an exhibition. One of the cop asked them to pass through a metal detector. Anita’s friends were initially scared of it. Anita, however, explained to them the purpose and working of the metal detector.

(a) On what principle does a metal detector work?

(b) Why does the detector emit sound when a person carrying any metallic object walks through it?

(c) State some qualities which Anita displayed while explaining the purpose of walking through the detector.

Q: (a) Find an expression for the torque acting on a dipole of dipole moment p in the presence of a uniform electric field E.
(b) Consider two hollow concentric spheres, S1 and S2, enclosing charges 2Q and 4Q respectively as shown in the figure.

(i) Find out the ratio of the electric flux through them.

(ii) How will the electric flux through the sphere S1 change if a medium of dielectric constant 'εr' is introduced in the space inside S1 in place of air? Deduce the necessary expression. 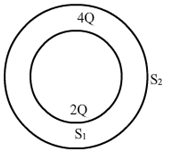 Q: (a) Find an expression for the energy stored in a parallel plate capacitor C, charged to a potential difference V.

(b) What is the equivalent capacitance of the network given below for a supply of 300 V, determine the charge and voltage across C4?

Q: Explain, with the help of a labeled diagram, the basic elements of an AC generator. State its underlying principle. Show diagrammatically how an alternating emf is generated by a loop of wire rotating in a magnetic field. Also deduce the expression for the instantaneous value of the emf induced in the rotating loop.

Q: Deduce an expression for the impedance of a series LCR circuit connected to an AC supply of variable frequency and hence deduce the expression to find the value of resonant frequency. Briefly describe how the phenomenon of resonance in the circuit can be used in the tuning mechanism of a radio or a TV set.

(i) separation between two slits in decreased?

(iii) monochromatic source is replaced by a source of white light?

Justify your answer in each case.

Derive an expression for the Prism formula? Find the angle of deviation produced by a prism of angle 9o, given refractive index of the material is 1.6.

The solution of the complete practice paper will be available very soon.