The marking scheme, in pdf format, for the upcoming board examination has also been released.

Candidates can check the CBSE Class 12 Political Science Sample Question Paper 2022-23 below to prepare well for their CBSE Class 12 Board Exam 2022-23.

I) All questions are compulsory.

II) Question numbers 1-12 are multiple choice questions of one mark each.

III) Question numbers 13-18 are of 2 marks each. Answers to these questions should not exceed 50 words each.

IV) Question numbers 19-23 are of 4 marks each. Answers to these questions should not exceed 100 words each.

VI) Question numbers 27-30 are of 6 marks each. Answers to these questions should not exceed 170 words.

VII) There is an internal choice in 6 marks questions.

3. Select one of the most appropriate statements for the ‘ASEAN WAY’-

(a) Reflects the lifestyle of ASEAN members

(b) Is an informal and cooperative interaction among ASEAN members

(c) Is the defence policy followed by the ASEAN members

(d) Is the philosophical principle that connects all the ASEAN members

4. Choose the correct set of countries that refused to adopt the Maastricht Treaty and European currency, Euro?

(a) Britain and France

(b) Denmark and Sweden

In the question given below, there are two statements marked as Assertion (A) and Reason (R). Read these statements and choose one correct answer from the given options-

5. Assertion (A) Traditional Security accepts confidence building as a means of avoiding violence.

Reason (R) Confidence building is a process in which countries share ideas and information with their rivals.

6. Assertion (A) The real challenge to Indira Gandhi came not from the opposition but from within her own party.

Reason (R) She had to deal with the ‘Syndicate’, a group of powerful and influential leaders from within the Congress.

a) A bomb blast in a market place or train etc.

c) An external attack by any military group

d) Violence created by a group of people or an individual

8. Which of the following statements about NITI Aayog are true?

(iii) NITI Aayog acts in the spirit of cooperative federalism

10. Arrange the following in chronological order-

ii) V.V. Giri elected as the President of India

11. Name the judge of the Allahabad High Court who declared Mrs. Indira Gandhi’s election as invalid---

12. Find the odd one out in the context of proclamation of emergency -

(a) Call for ‘Total Revolution’.

13. Highlight any one feature of the multi-polar world as visualized by both Russia and India.

14. Name the countries included in South Asia and suggest one way to enhance peace and cooperation in this region.

15. Highlight any two issues that dominate the politics of North–East India.

16. While throwing some light on the Mandal Issue, give one reason for anti-Mandal protests in India.

17. Evaluate balance of power as a significant component of traditional security policy.

18. How far did the Rajiv Gandhi – Longowal Accord succeed in bringing normalcy in Punjab?

19. ‘Some of the most significant responses to the challenge of environmental degradation have come from the environmental movements’. Justify the statement with special reference to movements against extraction of earth and against mega- dams.

20. Explain the areas of cooperation and disagreement between India and Bangladesh.

21. Do you agree with the statement that the foreign policy of independent India has pursued the dream of a peaceful world”? Support your answer with three suitable arguments.

22. Analyze two reasons for the imposition of national emergency in India on June 25, 1975.

23. ”The Soviet Union became a great power after the Second World War. However in no time the Soviet system became bureaucratic and authoritarian making life difficult for its citizens.” Do you agree with the given statement? Give arguments to prove your answer.

24. Read the passage given below and answer the questions that follow:

After the end of the bipolar structure of world politics in the early 1990s, it became clear that alternative centres of political and economic power could limit America’s dominance. Thus, European Union and ASEAN emerged as forces to reckon with. BRICS has also emerged as a new centre of power on the world stage. The term BRICS refers to Brazil, Russia, India and South Africa. The key objectives of BRICS are primarily to cooperate and distribute mutual economic benefits among its members besides non- interference in the internal policies of each nation and mutual equality. The 11th Conference of BRICS concluded in Brazil in 2019.

(1) Name the political leader who chaired the 11th Conference of BRICS.

(2) Which among the following statements about BRICS is correct?

a) BRICS was founded to promote the welfare of the people of South Asia and to improve their quality of life.

c) BRICS was established to create a free Trade Agreement (FTA) for investment, labour and services.

d) The headquarters of the BRICS are at Kathmandu (Nepal).

(3) BRIC turned into BRICS after the inclusion of South Africa in its first meeting in the year _________.

25. In the given outline political map of India, four states have been marked as (A), (B), (C) and (D). Identify these states on the basis of the information given below and write their correct names in your answer book along with the respective serial numbers of the information used and the concerned alphabets as per the format that follows:

(i) The state where a coalition led by the CPI formed the government in the year 1957.

(iii) The state related to Karpuri Thakur, who implemented reservation for backward class. 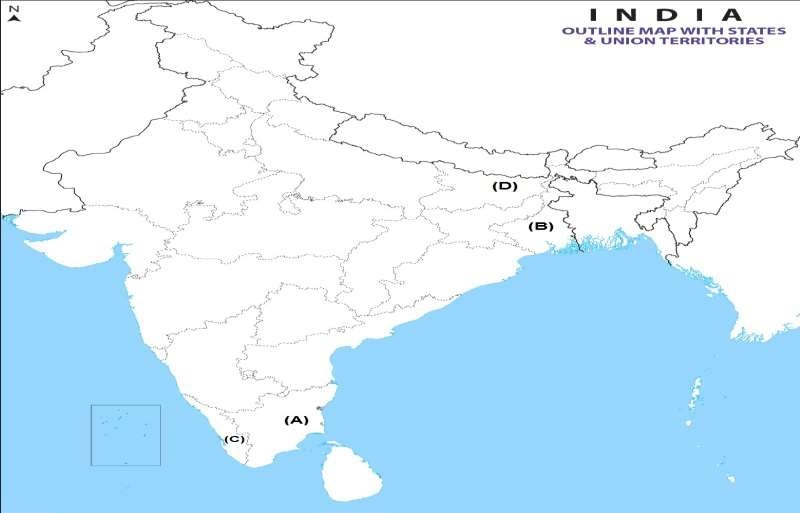 Note: Following questions are for the Visually Impaired Candidates in lieu of question number 25.

26. Study the given Cartoon and answer the questions that follow: 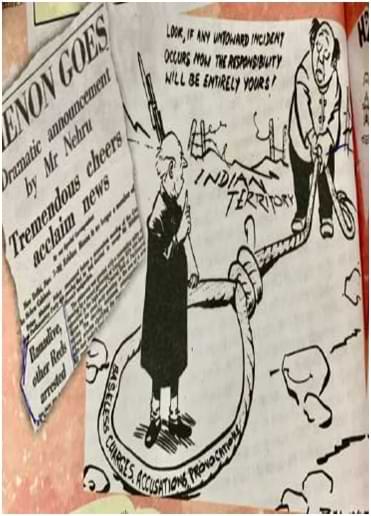 1) Border disputes between India and China erupted in 1960. Pandit Nehru was having talks with his counterpart____________ in China which proved futile.

2) Name the place in Indian territory which was occupied by China in the year 1962?

Following questions are for the Visually Impaired candidates in lieu of question number 26.

3. Which of the following statements related to Indo-China War (1962) is correct?

a. China could not cross the Line of Control

b. The Soviet Union remained neutral during the conflict

d. The Chinese forces did not withdraw their troops back to their earlier position

4. On what ground did India grant political asylum to Dalai Lama and thousands of Tibetan refugees? Choose the correct statement.

a. Dalai Lama was a known Tibetan leader

c. Dalai Lama had a political influence over India

27. Give an analysis of the cultural and political consequences of globalization.

Analyze any three reasons for resistance to globalization.

28. In this changing world, a strengthened and revitalized UN is desirable. Highlight the necessary reforms for an empowered United Nations.

Analyze the composition of the United Nations Security Council. What according to your opinion is the major difference in the privileges given to its permanent and non-permanent members?

29. Enlist the main considerations for bringing the Princely States with the Indian Union. Name the leader who played the historic role in this direction. What was his contribution?

Discuss three reasons for setting up of the States Reorganization Commission after India’s independence.

30. Coalition governments proved to be a boon for democracy in India. ‘Support the statement with three relevant arguments.

Analyze three major developments towards the end of 1980s that made a longlasting impact on the politics of India.

CBSE Class 12 Political Science Sample Paper 2022-23 in pdf format if you want to download and print it for easier access.

The marking scheme of the CBSE Class 12 Political Science Sample Paper 2022-23 in pdf format is attached.

CBSE board would commence its board exams for class 10 and 12 from February 15, 2023. Stay tuned to Jagran Josh for more updates.

Are all questions in CBSE Class 12 Political Science Board exams 2022-23 in MCQ format?

No. Go through the CBSE Class 12 Political Science Sample Paper 2022-23 questions to acquaint yourself with all the kinds of questions, like descriptive, assertion-reasons, and fill in the blanks etc, that can come in the board exams.

What is the marking scheme of CBSE Class 12 Political Science exam?

CBSE Class 12 Political Science exam is conducted for 80 marks in 3 hours. The remaining 20 marks are for Project work and viva voce.