The Indian History Practise Questions given here help the CDS aspirants in understanding the difficulty level of questions as well as the extent of coverage of the subject. 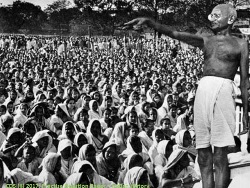 The questions from the Indian History cover various areas like Non Cooperation Movement, Role of Newspapers during the freedom struggle, Role of Mahatma Gandhi, etc. The questions are given below.

1. In the elections to the provincial legislatures in 1937 in British India

Which of the above statements is/are true?

The INC ministries resigned in 1939, in protest against Viceroy Lord Linlithgow's statement declaring British India’s participation in the World War II, without consulting the Indian people.

I. It was founded by Dayanand Saraswati in 1875.
II. Its present headquarters is located at Ajmer in Rajasthan.

Which of the above statements is/are correct.

Arya Samaj, means Noble Society, was founded by Swami Dayanand Sarasawti in April 1875 in Bombay. The primary objective of the organisation is to promote values and practices based on the infalliability of Vedas. Dayanand Sarasawti’s book Satyarth Prakash enunciates’s enunciates his vision of Indian society, which is followed by the Arya Samaj.

3. The book Satyagraha in South Africa was written by

Mahatma Gandhi, who led the Indian freedom struggle, was also a prolific writer. His autobiography The Story of my Experiments with Truth is one of his important works. His other writings are – All Men are Brothers, Diet and Diet Reform, The Bhagavad Gita, Trusteeship, Truth is God and Unto this Last- A Paraphrase.

4. Consider the following statements related to the Quit India Movement.

I.    It was suspended by Mahathma Gandhi in August 1942 in the wake of Chauri Chara Incident.
II.    It was the most non-violent movement during the freedom struggle movement.

Which of the above statements is/are true?

The Quit India Movement Movement was launched by Mahatma Gandhi at the Bombay Session of All-India Congress Committee on 8 August 1942. At the launch of the movement, the INC called for – An Orderly British Withdrawal- from India.

The movement cannot be termed as the most non-violent movement as isolated incidents of violence broke across the country.

The Non-cooperation Movement, which was launched by Gandhi on 31 August 1931 was suspended in the backdrop of the Chauri Chara Incident in which violent clashes took place between the protesters and the police resulting in the death of 22 police personnel.

5. It was in this province the Tebhaga movement was initiated.

The Tebhaga movement was initiated by the share croppers of the Bengal region. It was primarily against the exppressive jotedars in 1946-47. The uprising was due to the share cropping system that prevailed in the Bengal.

6. Who among the following headed the committee to draft a Constitution in 1928?

7. Which of the following sets of newspapers reflected the concerns of educated Indian Muslims during the Khilafat Movement?

8. Which of the following statements about the social reformer, Raja Rammohan Roy, is false?

Ans. (a) Rammohan Roy belonged to the gentry class whose power had been diminished because of the imposition of the Peasant Settlement.

Ram Mohan Roy is known as the Father of the Indian Renaissance. He was born in the Hooghly District of Bengal Presidency in 1772, into the Rarhi Brahmin caste. He founded the Brahmo Sabha movement in 1828, which was an influential socio-religious reform movement.

9. Which of the following characteristics about the State of Travancore in 18th century Kerala is/are correct?

The Kingdom of Travancore was an Indian kingdom from 1729 until 1949. It was ruled by the Travancore Royal Family from Padmanabhapuram, and later Thiruvananthapuram. During the peak of its glory, the State of Travancore covered most of modern-day central and southern Kerala. In the early 19th century, the kingdom became a princely state of the British Empire.

Among all the rulers of the State, Marthanda Varma is known as the maker of modern Travancore. He is most celebrated for crushing the Dutch expansionist designs at the Battle of Colachel in 1741.

10. Which of the following is/are the characteristic(s) of the Sannyasi and Fakir uprisings?

I. These uprisings refer to a series of skirmishes between the English East India Company and a group of sannyasis and fakirs.
II. One reason for the uprising was the ban on free movement of the sannyasis along pilgrimage routes.
III.    In the course of uprisings in 1773, Warren Hastings issued a proclamation banishing all sannyasis from Bengal and Bihar.
IV.    Both of these uprisings were contemporaneous with the Non-Cooperation Movement.

From 1763 onwards, the Sanyasis and Fakir uprisings had engulfed the area of Bengal, Bihar and United Provinces. Thee uprisings were narrated in detail in Bankim Chandra Chatterjee’s novel Anandamath. Vande Mataram, India’s National Song, has been taken from this novel.

The Non-cooperation movement was launched on 31 August 1920 by Mahatma Gandhi. It is considered as a significant movement of the Indian freedom struggle as it encouraged mass participation in the freedom movement.