In this article you will get CBSE Class 10 Science chapter 12, Electricity: NCERT Exemplar Problems and Solutions (Part-II). Every question has been provided with a detailed explanation. All the questions given in this article are very important to prepare for CBSE Class 10 Board Exam 2017-2018. 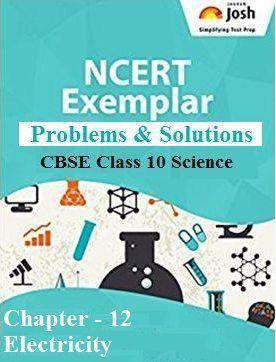 Here you get the CBSE Class 10 Science chapter 12, Electricity: NCERT Exemplar Problems and Solutions (Part-II). This part of the chapter includes solutions for Question No. 19 to 28 from the NCERT Exemplar Problems for Class 10 Science Chapter: Electricity. These questions include only the Short Answer Type Questions framed from various important topics in the chapter. Each question is provided with a detailed explanation. 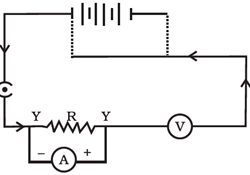 The correct diagram is as shown below: 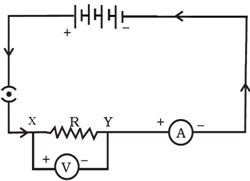 Question 20. Three 2resistors, A, B and C are connected as shown in figure. Each of them dissipates energy and can with stand a maximum power of 18 W without melting. Find the maximum current that can flow through the three resistors?

Here, first resistor in the path of current = R = 2

The maximum current which can pass through 2 Ω resistance is 3 A.

Question 21. Should the resistance of an ammeter be low or high? Give reason.

The resistance of an ammeter should be low. This is because an ammeter is connected in series with the circuit for the measurement of electric current. In case, its resistance is high, then some amount of current may lost in heating it leading to the inaccurate reading. An ideal ammeter is one which has zero resistance.

The required figure is as shown below:

The equivalent resistance of two 4 Ω resistances is equal to 2Ω. This combination is connected to Therefore, 2Ω resistance in series.

Hence, the total voltage drop is same across 2resistor and the parallel combination of two resistors, cell of 4.

Question 23. How does use of a fuse wire protect electrical appliances?

An electric fuse is a safety device used to protect circuits and appliances by stopping the flow of any unduly high electric current. It works on the principle of the heating effect of electric current.

It is made up of material having low melting point and connected in series with the circuit. When current passing through the fuse exceeds a certain limit then it melts. Due to which the circuit breaks and current stops flowing.

Question 24. What is electrical Resistivity? In a series electrical circuit comprising a resistor made up of a metallic wire, the ammeter reads 5A. The reading of the ammeter decreases to half when the length of the wire is doubled. Why?

If l is the length of the conductor, A its area of cross section and R its total resistance then,

Let, l = initial length of the conductor, ρ = electrical resistivity of the material, A = cross-sectional area, then, 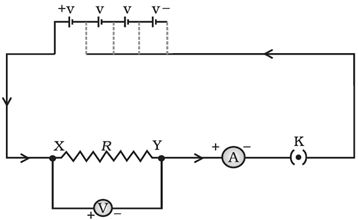 So, if initial reading of ammeter is I then after changes it will become I/2.

Question 25. What is the commercial unit of electrical energy? Represent it in terms of joules.

The commercial unit of electrical energy is kilowatt hour. It is written as kWh

Question 26. A current of 1 A flow in a series circuit containing an electric lamp and a conductor of 5when connected to a 10V battery. Calculate the resistance of the electric lamp.

Now, if a resistance of 10is connected in parallel with this series combination, what change (if any) in current flowing through 5conductor and potential difference across the lamp will take place? Give reason.

The situation given in question is shown in the figure given below: 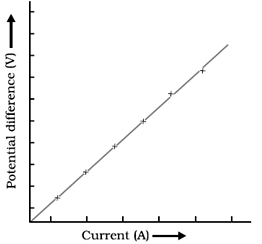 Question 27. Why is parallel arrangement used in domestic wiring?

Parallel arrangement is used in domestic wiring due to the following reasons:

Question 28. B1, B2 and B3 are three identical bulbs connected as shown in figure. When all the three bulbs glow, a current of 3A is recorded by the ammeter A.

(i) What happens to the glow of the other two bulbs when the bulb B1 gets fused?

(iii) How much power is dissipated in the circuit when all the three bulbs glow together?

Let Req is the net resistance of combination of three bulbs in parallel then,

All bulbs are identical so they must have same resistance.

Let R is the resistance of each bulb and all bulbs are connected in parallel hence,

Current through each bulb,

(i) If B1 gets fused, the current in B2 and B3 will remain unaffected as voltage across bulb B2 and B3 bulb remains same. Hence, glow of bulb will not be affected.

(ii) When bulb B2 gets fused, the current through B2 will be zero and current in B1 and B3 will remain 1A.