In this article you will get CBSE Class 10 Science chapter 11, Human Eye and Colourful World: NCERT Exemplar Problems and Solutions (Part-III). Every question has been provided with a detailed explanation. All the questions given in this article are very important to prepare for CBSE Class 10 Board Exam 2017-2018. 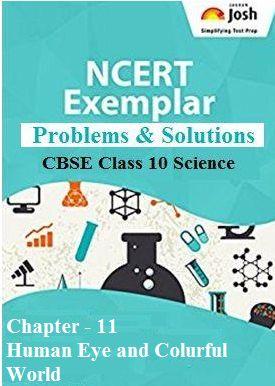 Find below the NCERT Exemplar problems and their solutions for Class 10 Science Chapter, Human Eye and Colourful World:

Question. 25 Explain the structure and functioning of the human eye. How are we able to see nearby as well as distant objects?

Structure of human eye: Cornea is the transparent window of eye that serves in refraction of most of the light rays towards the retina.Iris is the coloured part of the eye that controls the amount of light by regulating the pupil size. Pupil is a hole shaped opening in the middle of the eye. Retina is the innermost layer of the eye and contains an outer pigmented layer and an inner nervous layer. It has photo receptors (rods and cones). Optic nerve consists of nerve fibres from innermost layer of retina and serves to transmit impulse to brain. Eye lens is made up of a fibrous, jelly-like material and transparent structure. It serves to form an inverted real image of the object on the retina. Vitreous humour is clear, semi-solid structure that supports the eye ball. 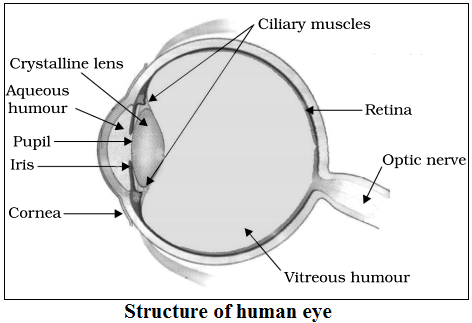 Functioning of human eye:  Light enters the eye through pupil and then the eye lens converges these light rays on the retina. An inverted real image of the object is formed on the retina and image-electric signals are to brain via the optic nerves. The brain reconstruct erect image of objects and we can see the objects.

Myopia: This eye defect is caused by elongation of eyeball which results in focusing of the image in front of retina. This causes formation of blurry images of the distant images but the nearby images are clear.

Correction of Myopia: Wearing of concave lens diverge the light rays to help the image to be focused on the retina, hence myopia is corrected using the concave lens.

Hypermetropia: Loss of flexibility or too short eyeball causes focusing of image behind the retina. In both cases, distant images are clear but the nearby images are blurry and the condition is termed as hypermetropia.

Correction of hypermetropia:Wearing a convex lens (plus powered) in front of a hypermetropic eye moves the image forward and focuses it correctly on the retina.

Question. 27 Explain the refraction of light through a triangular glass prism using a labelled ray diagram. Hence, define the angle of deviation. 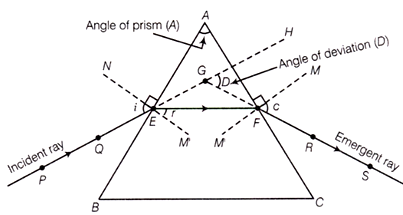 Question. 28  How can we explain the reddish appearance of sun at sunrise or sunset? Why does it not appear red at noon?

Sun is directly over head and sunlight travel relatively shorter distance causing only little of the blue and violet colors to be scattered. 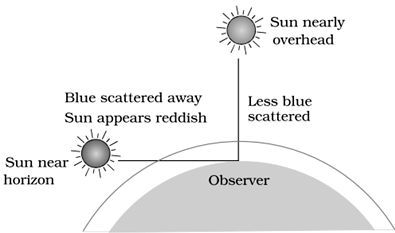 Splitting of light into its constituent colors is referred to as dispersion. When a narrow beam of white light falls on a triangular glass prism, light of different colors have different refractive indices in glass. However, the speed of light is same irrespective of its colors. Different refractive indices of different colors of light lead to their different bending pattern. This causes splitting of white light into light of seven colors called as VIBGYOR. V= violet, I= indigo, B=blue, G=green, Y= yellow, O=orange, R=red.

Question. 30 How does refraction take place in the atmosphere? Why do stars twinkle but not the planets?