CBSE 12th Physics NCERT Exemplar for Chapter 4 (Moving Charges & Magnetism) are available here. Here, students will get solutions of this chapter from question number 4.23 to 4.29. These questions are important for Class 12 Physics board exams and other competitive exams like AIPMT, NEET, JEE Mains etc.

NCERT Exemplar Solutions for Class12 Physics – Chapter 4 (Moving Charges & Magnetism) are available here. In this article, you will get solutions to short answer type questions i.e., from question number 4.23 to 4.29. Solutions of question number 4.1 to 4.22 are already available in Part I, Part II, Part III and Part IV. These questions can be asked in CBSE Class 12 Physics board exam.

NCERT Exemplar Solutions for CBSE Class 12 Physics, Chapter 4 (from question number 4.23 to 4.29) are given below:

Question 4.23: A 100 turn rectangular coil ABCD (in XY plane) is hung from one arm of a balance (Fig. 4.4). A mass 500g is added to the other arm to balance the weight of the coil. A current 4.9 A passes through the coil and a constant magnetic field of 0.2 T acting inward (in xz plane) is switched on such that only arm CD of length 1 cm lies in the field. How much additional mass ‘m’ must be added to regain the balance?

When the magnetic field is switched on, taking moment of force about mid-point, we have

Question 4.24: A rectangular conducting loop consists of two wires on two opposite sides of length l joined together by rods of length d. The wires are each of the same material but with cross-sections differing by a factor of 2. The thicker wire has a resistance R and the rods are of low resistance, which in turn are connected to a constant voltage source V0. The loop is placed in uniform a magnetic field B at 45° to its plane. Find τ, the torque exerted by the magnetic field on the loop about an axis through the centres of rods. 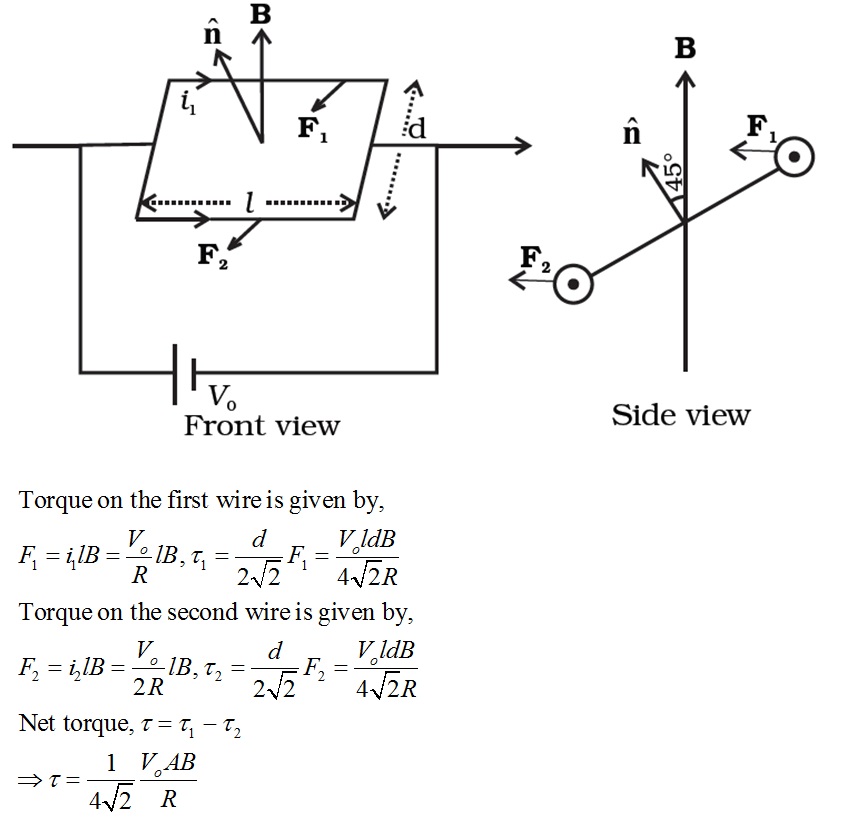 Question 4.25: An electron and a positron are released from (0, 0, 0) and (0, 0, 1.5R) respectively, in a uniform magnetic field B = B0 î, each with an equal momentum of magnitude p = e BR. Under what conditions on the direction of momentum will the orbits be nonintersecting circles?

Here B is along the x axis, for a circular orbit the momenta of the two particles are in the y - z plane. Let p1 and p2 be the momentum of the electron and positron, respectively. Both of them define a circle of radius R. They shall define circles of opposite sense.

Suppose p1 makes an angle θ with the y - axis p2 must make the same angle. The centres of the respective circles must be perpendicular to the momenta and at a distance R. Let the center of the electron be at Ce and of the positron at Cp.

The coordinates of Ce is

The coordinates of Cp is

The circles of the two shall not overlap if the distances between the two centers are greater than 2R.

Let d be the distance between Cp and Ce. 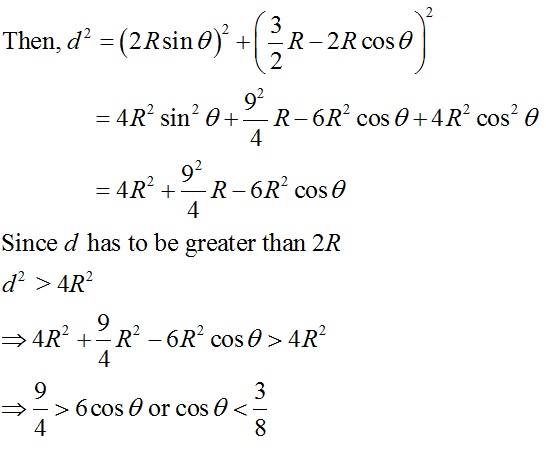 Question 4.26: A uniform conducting wire of length 12a and resistance R is wound up as a current carrying coil in the shape of (i) an equilateral triangle of side a; (ii) a square of sides a and, (iii) a regular hexagon of sides a. The coil is connected to a voltage source V0. Find the magnetic moment of the coils in each case. 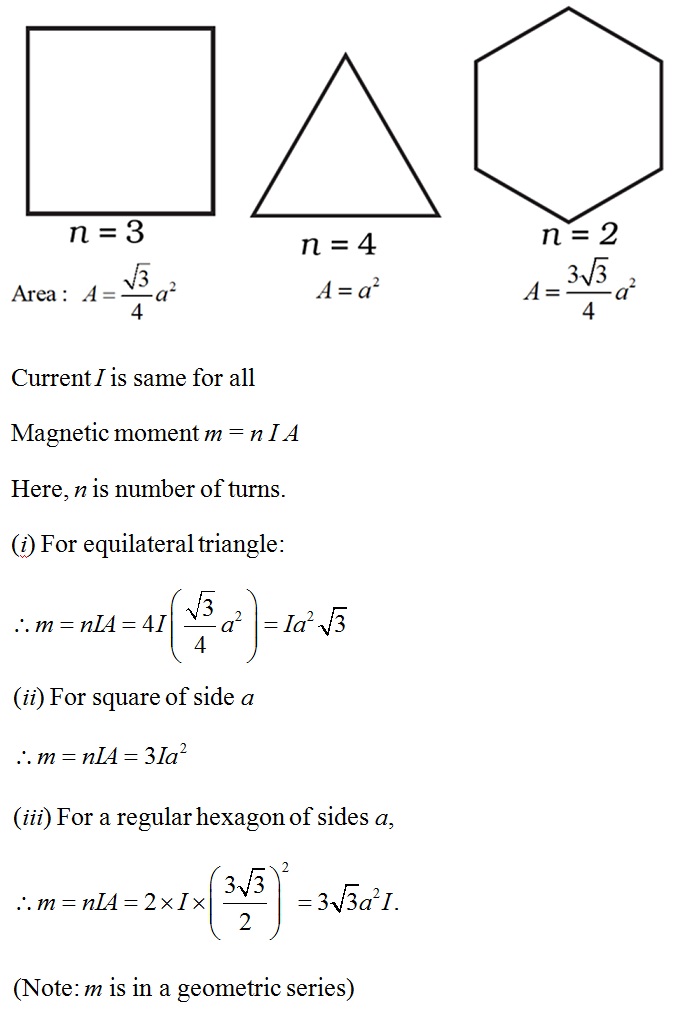 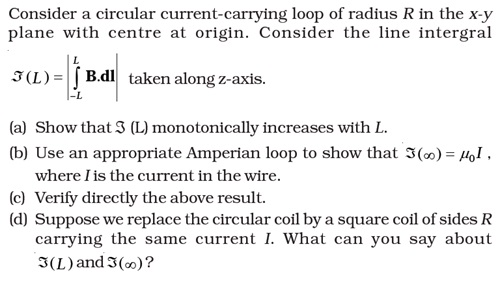 (a) B (z) points in the same direction on z - axis and hence J (L) is a monotonically increasing function of L.

(b) J(L) + Contribution from large distance on contour C = μ0I 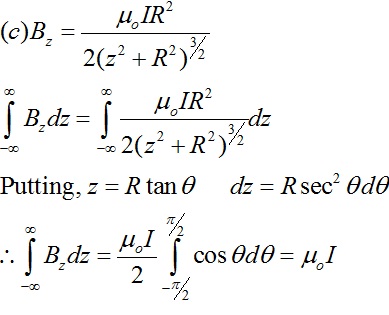 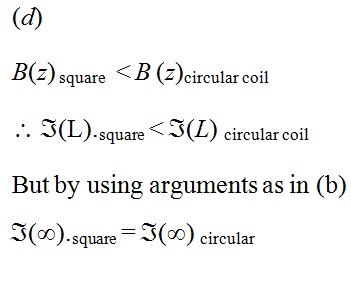 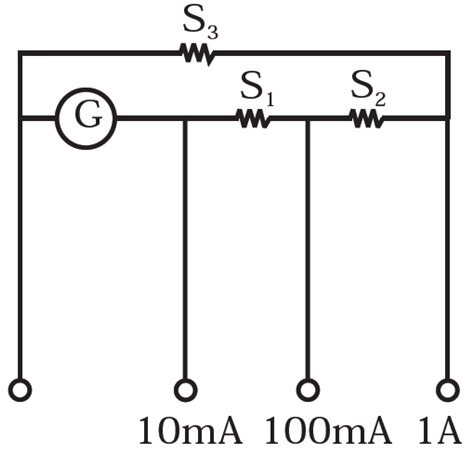 Question 4.29: Five long wires A, B, C, D and E, each carrying current I are arranged to form edges of a pentagonal prism as shown in Fig. 4.6. Each carries current out of the plane of paper.

(a) What will be magnetic induction at a point on the axis O? Axis is at a distance R from each wire.

(b) What will be the field if current in one of the wires (say A) is switched off?

(c) What if current in one of the wire (say) A is reversed? 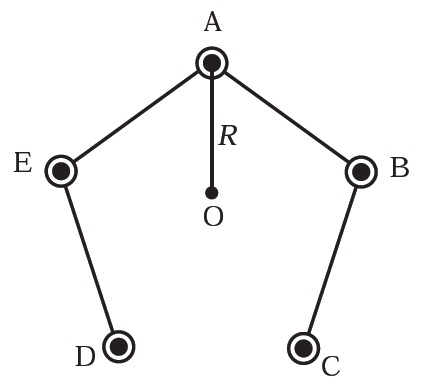 (a) Suppose the five wires A, B, C, D and E be perpendicular to the plane of paper at locations as shown in figure.

Thus, magnetic field induction due to five wires will be represented by various sides of a closed pentagon in one order, lying in the plane of paper. So, its value is zero.

(b) Since, the vector sum of magnetic field produced by each wire at O is equal to 0. Therefore, magnetic induction produced by one current carrying wire is equal in magnitude of resultant of four wires and opposite in direction.

Therefore, the field if current in one of the wires (say A) is switched off is (μoI)/(2πR) perpendicular to AO towards left.

(μoI)/(πR) perpendicular to AO towards left.