Assistant Enforcement Officer is a Group B non-technical post in the Department of Revenue under Ministry of Finance. The pay band attached to the post is 9300-34800 and the grade pay is 4600. It is basically an inspector job where an individual has to deal with the Prevention of Money Laundering Act (PMLA) and Foreign Exchange Management Act (FEMA).

SSC CGL: An Exam to look forward to

SSC conducts the Combined Graduate Level (CGL) Examination every year to recruit personnel in various ministries of the Government of India as well as organizations such as CBI, CBDT, CBEC, NIA, CVC, etc. One of the popular posts in SSC CGL is that of the Assistant Enforcement Officer in the Directorate of Enforcement, Department of Revenue under Ministry of Finance, Government of India. 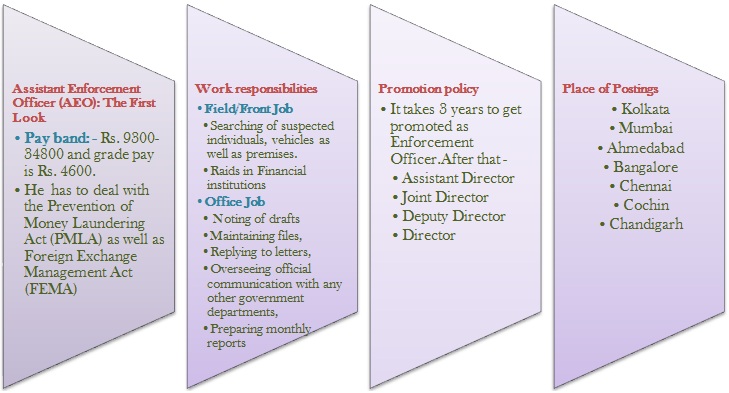 The Assistant Enforcement Officer is a Group B non-technical post in the Department of Revenue under The Ministry of Finance.

- It is basically an inspector job where an individual has to deal with the Prevention of Money Laundering Act (PMLA) as well as Foreign Exchange Management Act (FEMA).

- There is no need to wear uniform in this post.

What does an AEO do?

An AEO is the front-level inspector of the Government for preventing money laundering in the country. The responsibilities include

- Searching of suspected individuals, vehicles as well as premises.

- Often, AEOs have to go to raids in banks or other financial institutions as well. They have the authority to arrest people and seize illegal currency from them if needed.

However, if one is posted at the office, the job responsibilities include

- Overseeing official communication with any other government departments,

- An AEO gets the chance to be promoted in the next cadre i.e. of Enforcement Officer (Group B Gazetted) in 3 years.

There is no departmental examination for promotions, but it depends on the seniority as well as the rank in the SSC Examination.

Practically, the first two promotions take place within a total of 8-9 years, but after that, it becomes very difficult to get promoted to the next cadre. All the promotions are controlled from the head office of the Enforcement Directorate in New Delhi.

Who is the reporting officer of AEO?

An AEO has to report to the Enforcement Officer as per the hierarchy of the Central Government. The final controlling authority is the Director of the Directorate of Enforcement, Department of Revenue, Ministry of Finance, Government of India.

Where can you be posted as AEO?

AEO: Tits and Bits
This is one of the most powerful posts under SSC CGL Exam. It is not good for women candidates, though, because of its frequent transfer policy. Those who are looking for a challenging government job that includes decent salary, job security as well as power and authority, AEO is the one!!