The Indian Air Force provides a career with a handsome pay and perks. The Air Force Officers get the due promotions in their career as they go ahead with their services. The job is challenging and with the promotion, the challenge becomes bigger.

salary and promotion in air force

The Indian Air Force provides an outstanding pay along with a career filled with prospects. Apart from the nationalism, patriotism and honour; the IAF is known to take care of its employees with good pay and other benefits. The job offers challenges but it offers the due salary also.

The IAF Officers start to earn even before they get Commission from the IAF. During the last year of their training, they will start receiving a stipend of Rs. 21,000 per month. When the Commission is given to them, then their salary break-up will be as follows:

The Monthly Package of the IAF Officers would be:

Promotions in the IAF are based on timescale for the first three ranks. After this, the promotions are based on selection depending on the frequency with which positions become free. Promotion after this stage becomes steeper due to the pyramidal promotional structure. Hence, for this purpose, there exists a Time Scale (TS) promotion. Here are the details of the promotion policy:

(a) The Air Force presently recruits Commissioned Officers as Flying Officers (Lieutenants). However, the Technical Officers who are engineers are given ante-date in seniority of 2 years for pay and promotion compared to other Officers of the IAF. The reason is to attract the best possible talent in the technical field.

(b) Officers after serving as Flying officers for 3 years are promoted to Flight lieutenants. However the Officers must pass a departmental examination referred to as Promotion Examination 'B'. This examination consists of papers in General Knowledge, Staff duties and Professional subject. An officer must secure 50% to pass this examination.

(c) On completion of six years of total service an Officer of the IAF is granted the rank of Squadron Leader.

(d) To go further up in the hierarchy, all Officers must pass promotion exam ‘C’. This exam consists of papers on Current affairs, Air Power, Air Force Law and General Service training. An Officer becomes a Wing Commander after 12 years of service. 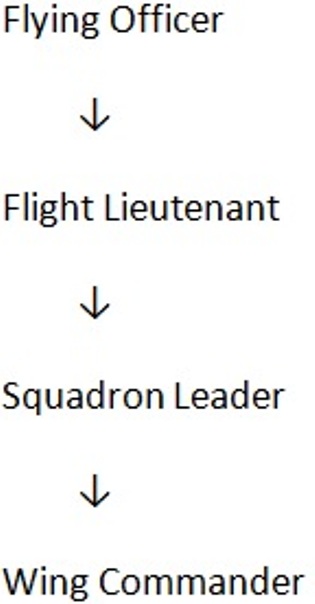 Promotions Based on Seniority and Merit

Promotions above the rank of Wing Commander are based on seniority and merit. An Officer of the Flying Branch will become eligible for consideration to the rank of Group Captain after completing 16 years of service.

Ground Duty Officers, who are non flyers, will be considered for Group Captain Rank after 18 years of service. He will face Promotion Board No. 1, which is presided over by the Air Officer in Charge Personnel (AOP).

Subsequent promotions to the rank of Air Commodore and Air Vice Marshal come under No. 2 Promotion Board of which the Vice Chief is the presiding officer. All recommendations of the Promotion Boards (1 and 2) are put for approval to the Ministry of Defence, which has the last say in all the matters of promotion.