As per reports, due to the technical issues in announcing Tier 1 Result of SSC CGL Exam 2016 online at ssc.nic.in was delayed. Hence it is likely that Staff Selection Commission (SSC) will announce the result in PDF format, as was in preceding years. 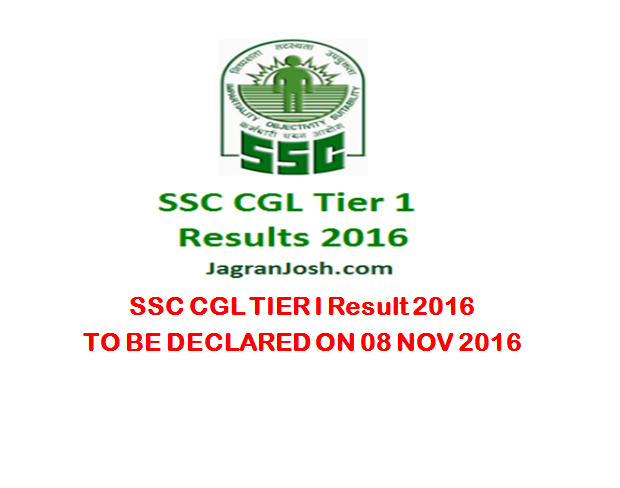 SSC CGL TIER I Result is highly awaited among the candidates who appeared in the examination. The SSC CGL TIER I Exam 2016 was held from 27 August 2016 to 11 September 2016 to fill up 4874 (tentative) posts in Staff Selection Commission. Candidates can now expect result to be out by 08 November 2016 at ssc.nic.in.

More than 15 lac candidates appeared in SSC CGL TIER I Exam 2016 and as the result is still not declared it is becoming a hindrance for them to prepare for next level. However, as per the information from the commission the SSC CGL TIER II Exam 2016 would be held from 30 November 2016 to 02 December 2016 (tentatively).

SSC CGL exam result 2016 for Tier 1 is just round the corner! This is ought to bring relief to lakh of result expectants, since no news of postponement has been notified by the Commission, as of now. SSC CGL Tier 1 exam was held on 27 August-11 September. Result will be announced at ssc.nic.in.

SSC CGL Exam Result is expected to be announced today. Any updates, if announced by the Commission, will be mentioned here.
SSC CGL Tier 1 exam is a part of the recruitment process followed by the Commission for filling up 4874 posts in various departments and ministries of Central government.

In SSC CGL TIER I Exam huge number of candidates appeared for the examination. SSC released the response sheet/ answer key on 21 September 2016 through which candidates were able to tally the paper but the result is eagerly awaited.

SSC had released the response sheet/ answer key on 21 September 2016 through which candidates were able to tally the paper but the result is eagerly awaited.

Candidates who will be selected in SSC CGL TIER I Exam will be required to appear for SSC CGL TIER II Exam which is tentatively is scheduled to be held in the month of November. The overall selection procedure for SSC CGL Exam 2016 includes Written Examination, Data Entry Skill Test/Computer Proficiency Test and Document verification.

Candidates who have appeared in the SSC CGL TIER I Exam can check the result at ssc.nic.in tomorrow i.e., on 07 October 2016 if declared by the organization as per the update. The result can be viewed on the official website by using the registration number/ roll number and date of birth.