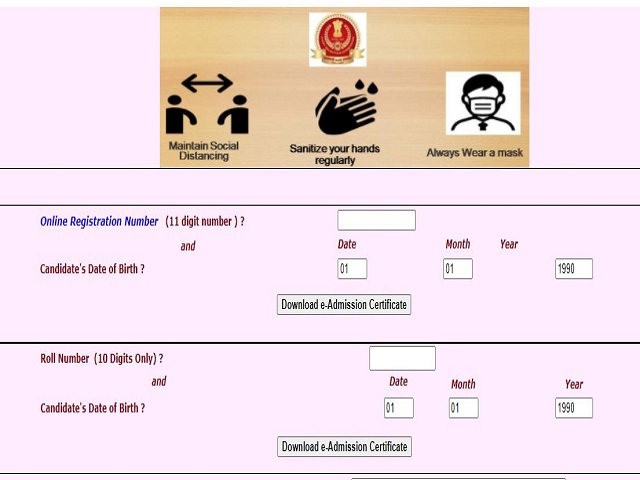 SSC CHSL Tier 1 Exam will be conducted from 12 April to 27 April 2021. The Candidates are advised to carry their SSC SR CHSL Tier 1 Admit Card along original photo identity card having Date of Birth as printed on the call letter.

The candidates can download the answer key  from SSC website - ssc.nic,in in the month of May 2021 and submit objection if any with a payment of Rs. 100/-.

SSC SR CHSL Result shall be announced after considering all the objections.

I forgot my ssc chsl registration number. How can I download SSC SR Admit Card ?

You can also download your admit card using your name and date of birth.

The date of birth on voter ID is different from ssc sr admit card. What to do ?

In that case, you should carry an additional certificate (in original) as proof of their Date of Birth.

What is my SSC SR CHSL Exam Centre ?

You can check your exam centre on your SSC SR CHSL Admit Card 2020-21.

What should carry at SSC CHSL Exam Centre ?

You should carry your admit card and a original photo identity card having the same Date of Birth (including Date, Month & Year) as printed as admit card.

What is SSC SR Admit Card Link for CHSL Exam ?