Meaning: A corrupt or depraved or degenerate act or practice

Meaning: A corrupt or depraved or degenerate act or practice

Usage/Example: 1. It depends on whether a local election registrar determines that their crimes constituted “moral turpitude” under the state's constitution. (Source: The Marshall Project)

2. she raised concerns about "being forced to engage in acts of moral turpitude that would subject her to disbarment." (Source: Corporate Counsel)

3. In 2006, the District of Columbia Bar filed a petition arguing that Rohde's conviction involved a crime of moral turpitude requiring disbarment. (Source: Law360) 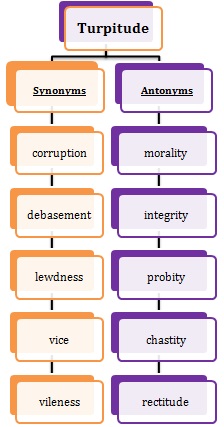