Union Budget 2018-19 highlights of fiscal management provided in this article will help IAS aspirants to prepare for the IAS Prelims as well as IAS Mains exam.

There is a paradigm shift in fiscal management in India and the government has tried many efforts in this regard in the last few years. But, after the rollout of GST, the fiscal situation has improved. While presenting the Budget speech for the year 2018-19, the Union Finance Minister has echoed about the performance of Indian economy. Here are some of the highlights of fiscal management in the Budget for 2018-19.

The Budget Revised Estimates for expenditure in 2017-18 are Rs.21.57 lakh crore (net of GST compensation transfers to the States) as against the Budget Estimates of Rs.21.47 lakh crore. 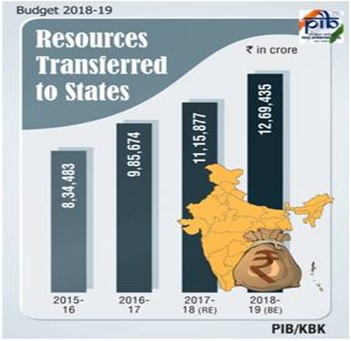 Continuing Government’s path of fiscal reduction and consolidation, the Finance Minister projected a Fiscal Deficit of 3.3% of GDP for the year 2018-19.
The Revised Fiscal Deficit estimates for 2017-18 were put at Rs. 5.95 lakh crore at 3.5% of GDP.

The Government has also proposed acceptance of key recommendations of the Fiscal Reform and Budget Management Committee to bring down Central Government’s Debt to GDP ratio to 40%. 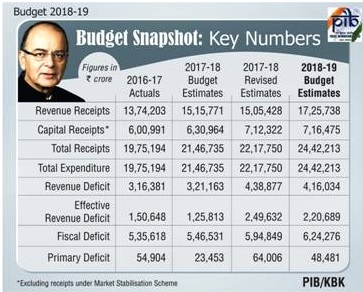 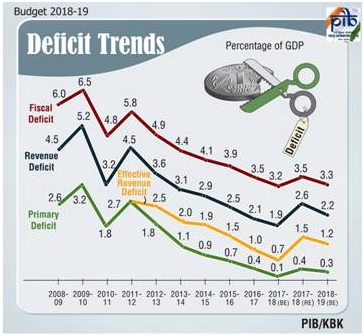 Restrictions on the cash economy

The Government has taken several attempts to reduce the cash economy and increase the tax net which results into rich dividends for the government and the growth rate of direct taxes in financial years 2016-17 and 2017-18 have significantly improved.

Further, buoyancy in personal income tax for the financial year 2016-17 and 2017-18 (RE) are 1.95 and 2.11 respectively which indicates that additional revenue collected in the last two financial years from personal income tax compared to average buoyancy for the pre 2016-17 period, amounts to a total of Rs. 90,000 crore, which is a result of strong anti-evasion measures by the government.

In a measure that proposes to control the cash economy, payments exceeding Rs. 10,000 in cash made by trusts and institutions shall be disallowed and would be subject to tax. In order to improve TDS compliance by these entities, the Finance Minister has proposed to provide that in case of non-deduction of tax, 30 percent of the amount shall be disallowed and would be taxed. 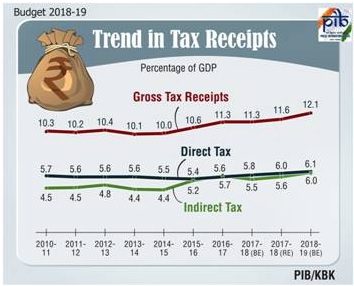 A number of returns filed by taxpayers have significantly risen and the number of Effective Tax Payers has increased from 6.47 crore at the beginning of the Financial year 2014-15 to 8.27 crore at the end of 2016-17. 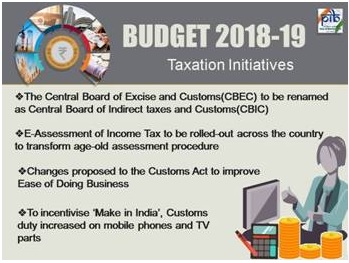 In the Budget 2018-19, Government has proposed 100 percent deduction to companies registered as Farmer Producer Companies with an annual turnover up to Rs. 100 crore on profits derived from such activities, for a period of five years from the financial year 2018-19.

In order to promote post-harvest agriculture activities, Government is encouraging the previously announced “Operation Greens” which will give a boost to the Sampada Yojana.

In order to encourage the creation of new employment opportunities, the deduction of 30 percent Under Section 80-JJAA with a further relaxation to 150 days in the case of the apparel industry, has been proposed in the budget to be extended to the footwear and leather industry.

In fulfilment of the promise to reduce the corporate tax rate in a phased manner, the Government has proposed to extend the reduced rate of 25 percent currently available for companies with a turnover of less than 50 crores (in Financial Year 2015-16), also to companies reporting turnover up to Rs. 250 crore in Financial Year 2016-17.

The reduction of the corporate tax rate would benefit the entire class of micro, small and medium enterprises, which account for almost 99 percent of companies filing tax returns.

The estimated revenue foregone during Financial Year 2018-19 will be Rs. 7,000 crore and the lower corporate income tax rate would leave such companies with a higher investible surplus, which would create more jobs.

The proposed relief to Senior Citizens are as follows:

In order to promote trade in stock exchanges located in IFSC, the Government has proposed to provide more concessions for International Financial Services Centre (IFSC).

The concessions propose the transfer of derivatives and certain securities by non- residents from capital gains tax, and non-corporate taxpayers operating in IFSC to be charged Alternate  Minimum Tax (AMT) at concessional rate of  9 percent at par with Minimum Alternate Tax (MAT) applicable for Corporates.

Education and Health: In order to take care of the education and healthcare needs of Below Poverty Line (BPL) and rural families, The Budget proposes to increase the cess on personal income tax and corporation tax to 4 percent from the present 3 percent. The new cess will be called the “Health and Education Cess” and is expected to lead to a collection of an estimated additional amount of Rs. 11,000 crore.

The Government has also proposed to abolish the Education Cess and Secondary and Higher Education Cess on imported goods and now, the Social Welfare Surcharge will be imposed (except the exempted list given in Annexure 6) in its place.

The Social Welfare Surcharge will be charged at the rate of 10 percent of the aggregate duties of Customs on imported goods, to provide for social welfare schemes of the government.

The Budget 2018-19, being the first budget after the rollout of GST, the budget proposals have been made on the custom side while, the Government has also proposed changes in customs duty to promote creation of more jobs in the country and also to incentivise domestic value addition and Make in India in sectors such as food processing, electronics, auto components, footwear and furniture.  This is why it has been proposed that the customs duty on mobile phones will be increased from 15 percent to 20 percent, on some of their parts and accessories to 15 percent and on certain parts of televisions to 15 percent.