The Union Public Service Commission had conducted the Civil Services Prelims Exam 2018 on 3rd June, 2018. The questions were well above the difficulty level of the common IAS aspirants. One important noticeable change which was seen in the paper was the increased number of applied questions.

The paper asked a variety of questions and the options made the questions more tricky. The habit of UPSC to play with the mind of the IAS aspirants in not new. This psychological designing of the options was started in the year 2010. The IAS Prelims papers prior to the year 2010, the answer options were simpler in  nature, but after 2010, the answer options are so designed so that only a complete information can help and partial information regarding the topic won’t help.

This year the interdisciplinary nature of the questions become more prominent. The IAS prelims Exam 2018 questions were the perfect blend of traditional topics with the evolving research on those topics. The questions were not exclusively belonged to a subject category, but were a real mix of two or more of them.

On the above basis, we can say that there were 12 questions which were easy, 54 questions having medium difficulty level and rest 34 questions were really difficult in nature. The easy questions were direct in nature and were very common in their orientation. It is expected that the common IAS aspirants must have read the topics in the commonly available study materials. For example the questions which asked about Pakhui Wildlife Sanctuary, Bani Thani, Terminal High Altitude Area Defense (THAAD), Champaran Movement , Residuary Powers under the Government of India 1935 Act and the likes. The given question can be done through the elimination process very easily. 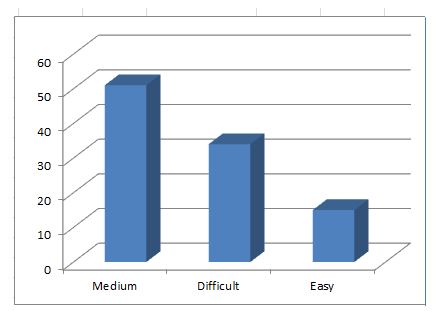 1. Aadhaar card can be used as a proof of citizenship or domicile.
2. Once issued, Aadhaar number cannot be deactivated or omitted by the Issuing Authority.

The questions related to the Indian Economy were difficult in nature because of their implied nature. Around 13 questions which are directly or indirectly asked from the Indian Economy topics. Indian Banking System acquired prominence this year and four questions were asked from this area. These questions were also not easy in their orientation. The question related to Merchant discount rate,Definition of legal tender Money and the likes were difficult in nature. In general, the IAS aspirants do not go into that depth and hence find the questions difficult this year. The question related to the opportunity cost was a surprise because its familiarity with the business students.

Geography and the Environment took the back seat this year and only 14 questions appeared from these two subjects. 5 questions had the overlapping with the Current Affairs section. So for the geography the questions were of a mixed nature. Most of the questions were of medium difficulty level and one question related to the Pakhui Wildlife Sanctuary was very easy. Environment and ecology questions were not so prominent in the paper. It is a clear departure from the previous year paper formats.

History of India and Indian National Movement again took prominence this year. Around 17 questions were directly asked from this subject topic. The nature of the questions were direct but the comparison of the information made the questions difficult in nature. 2 questions were easy for example Champaran and Hind Mazdoor Sabha questions. The reason why we categorise these as easy because the Champaran and Hind Mazdoor Sabha are the prominent topic in the Modern History and Indian National Movement. The candidates just have to read the study material as well. The Question related to the Foreign Travller Jean-Baptiste Tavernier was really difficult and one should not expect the IAS aspirant to research for each traveller.

“This year too, UPSC lived up to its reputation among students of being the 'Unpredictable service commission'. In GS Paper-I, the areas from which questions are usually asked was different for many questions. Traditional topics like polity, which were asked conceptually in 2017, were this around asked with a much different focus in mind. Some questions such as the one on National Sample Survey Organisation (NSSO) also tested allied knowledge of students. Conceptual questions types too saw an innovation in the form of a paragraph based question on Internet-of-things. The dominance of environment based questions ebbed as this year we saw around 14 environment based questions, the same as polity, which stood at 24! So, the questions were more well distributed across topics and subtopics this time around. This played a positive role as candidates were not rewarded or punished based on his/her individual strength or weaknesses.

There were several changes in GS Paper-II. Candidates are expected to clear this hump before their scores in Paper-I are checked and some who went in fully unprepared were in for a surprise. There were no Verbal Logic questions and only 26 Reading Comprehension based questions were asked. Data interpretation and Analytical Reasoning had 11 questions each. Those candidates who could use question selection strategies could significantly ease the solving process.” said Aditya Jagtap, mentor, Career Launcher.