Find WBJEE 2015 Solved Physics Question Paper – Part 3 in this article. This paper consists of 5 questions (#11 to #15) from WBJEE 2015 Physics paper. Detailed solution of these questions has been provided so that students can match their solutions. 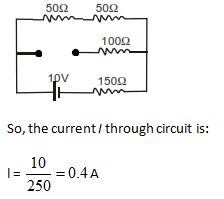 The rms speed of any molecule is given as:

13. Two particles, A and B, having equal charges, after being accelerated through the same potential difference enter a region of uniform magnetic field and the particles describe circular paths of radii R1 and R2 respectively. The ratio of the masses of A and B is

The radius of circular path, r is given as, 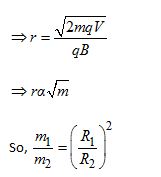 If OAB is a sector of a circle, radius r, with angle 2α at the centre then the centre of mass lies on line of symmetry such that,

If, arc AB tends to zero then the centre of mass is at distance R from the origin. And as the arc length AB increases, centre of mass starts moving down.

The e.m.f. induced between the two ends of the conductor is given as: