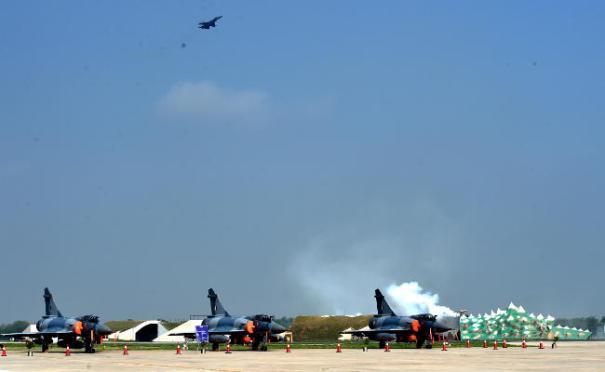 Indian Air Force (IAF) is commemorating 20 years of Kargil War on June 24, 2019. To mark this day IAF turned Gwalior air base into a war theater with reforming some of the landmark air operations in 1999. IAF used Mirage 2000 fighter aircraft to reenact Tiger Hill attack. IAF aircraft and explosives were blown up on a ‘model hill’ to recreate the crucial events of the war.

Air Chief Marshal BS Dhanoa was the chief guest for the event. Five Mirage 2000, two MiG 21s and one Sukoi 30 MKI were on static display at the base. One of the Mirage 2000s showcased the Spice bomb carrier. The bomb was used in the Balakot airstrike in February.

Air Chief Marshal Dhanoa also talked about the Balakot airstrike, and the retaliation by Pakistan. He said that while the Indian Air Force was able to achieve its military objective, Pakistan failed to achieve the same, confirming that no Pakistani jet crossed over the Line of Control (LoC). “They did not come into our airspace. The main thing that you should look at is what the objective of the military operation was. Our objective was to strike in Balakot and we achieved it. Their objective was to strike our army bases but they could not do it,” said the Air Chief Marshal.

•    The Indian Air Force also used MiG-27 and MiG-29 against Pakistani troops and the bomb was also dropped wherever Pakistani soldiers occupied the area.

•    With the help of MiG-29, several targets of Pakistan were attacked with R-77 missiles. Also, IAF’s MiG-21s and Mirage 2000 were extensively used in the Operation Safed Sagar during this war.

•    Kargli war was not a conventional war it was more a conflict but mostly it is named as war.

•    Indian Army declared the mission successful on July 26, 1999, and since then every year it has been celebrated as Kargil Vijay Diwas.

•    India increased its defence spending in the budget presented the year after the Kargil war.

•       The Kargil War, also known as the Kargil conflict was an armed conflict between India and Pakistan that took place between May and July 1999 in the Kargil district of Kashmir and elsewhere along the Line of Control (LOC). In India, the conflict is also referred to as Operation Vijay which was the name of the Indian operation to clear the Kargil sector.

•       The cause of the war was the infiltration of Pakistani soldiers disguised as Kashmiri militants into positions on the Indian side of the LOC. The victory for India came at a very high price. The official death toll for India was 527 and for Pakistan, it was between 357 and 453.