Aarogya Setu app: World Bank praised India’s Aarogya Setu app that can track contagion. Google and Apple are working to create a similar software. Know all about it.

The World Bank made the observations in its South Economic Focus report that was released recently. The report stated that digital technology can also be used to monitor the spread of COVID-19.

The report mentioned the launch of India’s Aarogya Setu app that uses the data from the persons’ smartphones to tell whether the user has been near someone who tested positive for COVID-19.  India had launched the Aarogya Setu app to curb the COVID-19 pandemic on April 2, 2020.

Global technology giants, Google and Apple, stated on April 11 that they are building software for smartphones, which will help in contact tracing just like Aarogya Setu App. The software will inform the users whether they have come in touch with COVID-19 positive people.

While responding to this announcement, NITI Aayog CEO Amitabh Kant stated that India leads the way in contact tracing for COVID-19. He further added that he glad to see Apple and Google joining hands to develop contact tracing on the lines of #AarogyaSetu. 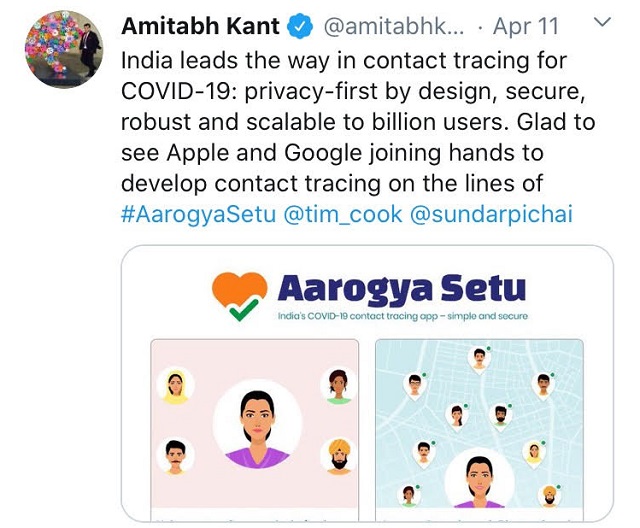 • The Aarogya Setu app will inform the user if they have crossed paths with someone who was tested COVID-19 positive.

• The Aarogya Setu app can track the user’s interaction with someone who has tested positive for coronavirus through a Bluetooth and location generated social graph.

• You will be alerted if someone you have come in close proximity, even unknowingly, tests positive for COVID-19.

• The app alerts are accompanied by instructions on how to self-isolate and what to do in case a person develops symptoms that may need help and support.

• The information collected by the Aarogya  Setu app including the location of the user and the details of those he/ she came in contact with, is by default saved on the phone.

• The data is only sent to the NIC servers when they have either come in contact with an infected person or when their probability of being infected is high.

• The data that is collected by the Aarogya Setu app, both that remains on the device and which has been uploaded on the server are purged on a regular basis.

How to install Aarogya Setu App?

Steps to install the Aarogya app

1. Install the app
2. Switch on Bluetooth and location
3. Set location sharing to always