CA Kuttappa, a Dhronacharya awardee, took over as India’s new chief boxing coach during the beginning of the ongoing national camp, on December 10, 2018. He succeeds veteran boxing coach SR Singh, who has now retired.

CA Kuttappa, a Dhronacharya awardee, took over as India’s new chief boxing coach during the beginning of the ongoing national camp, on December 10, 2018. He succeeds veteran boxing coach SR Singh, who has now retired.

The 39-year-old, who was an assistant coach earlier, is credited with shaping some of the country's most successful boxers such as Vijender Singh, M Suranjoy Singh and Shiva Thapa. The Army man said his elevation was High-Performance Director Santiago Nieva's idea.

• Star pugilist Vikas Krishan (75kg), a Commonwealth Games gold-medallist and Asian Games bronze-winner, was left out of the national camp following his decision to sign up with American promoter Bob Arum.

• Kuttappa is just one of the two coaches from the reigning national champions, the Services Sports Control Board (SSCB), in the camp.

• The line-up of coaches at the camp was mostly dominated by coaches from the Railways Sports Promotion Board (RSPB). RSPB's representation in the coaches' list was five including the long-serving Jaydev Bisht, Lalit Prasad, Jai Singh Patil, Jitender Kumar and Jagdip Hooda.

• Another CWG-medallist, Manoj Kumar, who is currently undergoing rehabilitation for a few long-standing niggles, was also absent from the camp.

• The current set of boxers in the camp, barring the national champions, will be giving trials in the second week of January, which will lead to pruning and form the basis of selection for the India Open and the prestigious Strandja Memorial in Bulgaria. 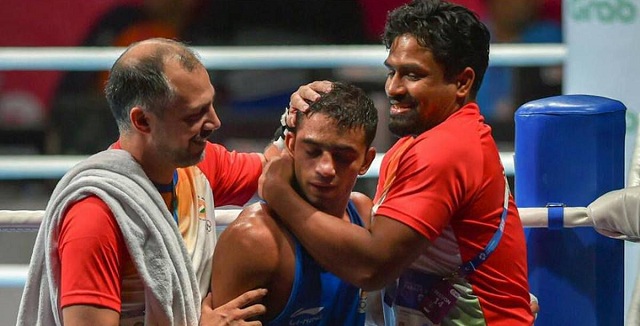 Hailing from the Chenanda family in Mysore, CA Kuttappa has been coaching the Indian men’s boxing team since 2009 May.

Prior to that, he was serving as a Subedar in the Indian Army.

He was nominated for the Dronacharya Award for 2018 in Boxing. The shortlisted names for the award were recommended to the Sports Ministry by an 11-Member Award Committee. The list was then forwarded to Sports Minister Rajyavardhan Singh Rathore for final approval.

As the head coach of the Indian Boxing team, Kuttappa’s first major assignment would be the second edition of India Open, which is scheduled to be held in January 2019 in Guwahati, Assam.