The Gandhi family members will be without SPG cover for the first time after 28 years.

The Gandhi family will now be provided with Z plus security cover. Under Z plus security, the Gandhi's will be protected by the National Security Guards or the Central Reserve Police Force (CRPF).

The decision was taken after getting the feedback from all relevant agencies at the highest-level security review meeting of the Home Ministry. The SPG security cover is reviewed every year after assessing all the possible threats, as per sources. 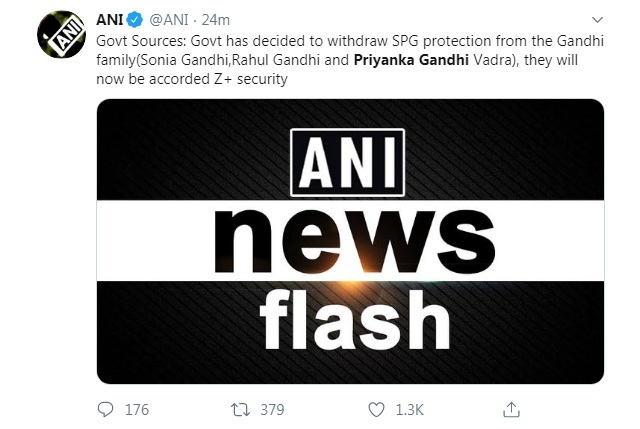 SPG protection: All you need to know

What is SPG Security Cover?

The special protection group was constituted on April 8, 1985 as the highest tier of security. The decision to constitute the group was taken after the assassination of Prime Minister Indira Gandhi in October 1984.

Who gets SPG Security Cover?

The SPG, which was constituted and trained specially to protect Prime Minister Rajiv Gandhi in the view of the threats against him, was withdrawn after he ceased to be Prime Minister.

Who can decline SPG security?

What is Z plus security?

The President of India does not come under the SPG security cover due to low threat perception. The President is protected by the Indian Army's PBG (President's Bodyguard) regiment. The PBG regiment is one of the oldest and one of the last remaining cavalry regiments in the world.

Rahul Gandhi was criticized, in many instances, for not letting SPG accompany him in foreign visits. According to reports, out of Gandhi’s 156 abroad trips, he did not take the SPG with him for 143 trips.

Then in October 2019, the government made it mandatory for the SPG personnel to accompany Gandhi’s on all their trips at all times, even during their personal trips.

The SPG security cover for former Prime Minister Manmohan Singh was removed similarly in August 2019 after assessments indicated reduced threat perceptions. He has also been given Z-plus category security cover.