China has constructed an experimental air purifying tower called the Xian smog tower, which is touted to be the ‘world’s biggest air purifier’, to combat its severe smog and air pollution. 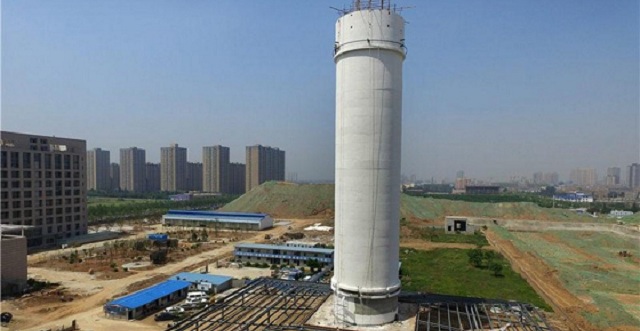 China has constructed an experimental air purifying tower called the Xian smog tower, which is touted to be the ‘world’s biggest air purifier’ with a height of over 100 meters, to combat smog and air pollution.

The tower is undergoing tests by researchers of the Institute of Earth Environment at the Chinese Academy of Sciences. It is reported to be having a positive effect on the air quality in the area.

According to the research head Cao Junji, the quality of air was recorded to be better after observations were made over a distance of 10 sq km in the past few months. He also shared that the tower has resulted in more than 10 million cubic meters of clean air since the day it was launched.

The tower has managed to bring down the pollution levels in Xian from ‘critical’ to ‘moderate’ stage. The system works through greenhouses covering about half the size of a soccer field around the base of the tower.

However, Cao stated that these results are just preliminary and more detailed findings will be announced by the research team in March 2018.

The air quality in China is reported to be severely poor, almost equal to a person inhaling the smoke of 21 cigarettes.

The country, as a result, has been struggling with extreme smog for years now.

Workings of the Smog Tower

• Launched in 2015, the tower was announced to find a low-cost method to artificially remove pollutants from the atmosphere.

• The polluted air is sucked into the glasshouses of the tower and is then heated up by the solar energy.

• The hot air then moves through multiple cleaning filters and helps in reducing the pollution.

• The size of the greenhouses could cover nearly 30 sq km and will be capable of purifying the air for a small-sized city.

World to become drier, drought and wildfires to increase with global warming of 2°C

Chocolate likely to get extinct by 2050