China has launched a massive ship, which is being referred as Asia's largest dredging vessel, at a port in eastern Jiangsu province. The vessel described as a ‘magic island maker’ is capable of building artificial islands. 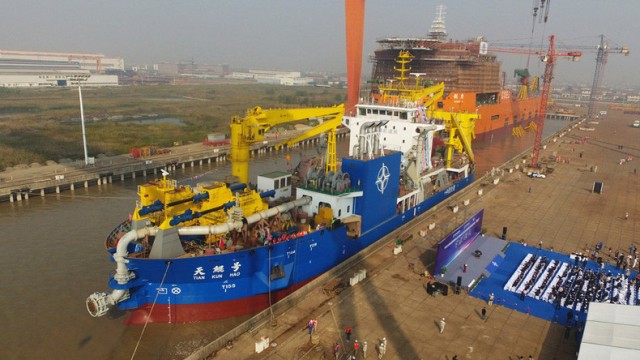 China on 3 November 2017 launched a massive ship, which is being referred as Asia's largest dredging vessel, at a port in eastern Jiangsu province.

The vessel described as a ‘magic island maker’ is capable of building artificial islands.

• Named Tian Kun Hao, the ship is capable of digging 6,000 cubic meters an hour, which is equivalent to three standard swimming pools.

• It is a larger version of the one China used to dredge sand, mud and coral for transforming reefs and islets in the South China Sea into artificial islands capable of hosting military installations.

• It can break underwater rocks and then suck out sand, water and mud and transfer the substance up to 15 kilometres away.

• It can also dredge up to 6,000 cubic meters an hour from a depth of up to 35 meters.
• When the ship’s testing is completed in June 2018, it will be the most powerful such vessel in Asia.

China’s activities in the South China have been a point of contention with neighbouring countries that lay claim to parts of its waters.

The sea, which is reported to be storing a mass wealth of oil and gas deposits, is a significant trade route through which shipping trade worth USD 5 trillion passes annually.

China claims nearly all of the sea. Other nations including Vietnam, the Philippines, Malaysia, Brunei and Taiwan also lay claims to it.