The 12th edition of the UNEP Emissions Gap Report 2021 has been released. Know the top 10 key highlights and the progress report on meeting Paris Agreement goals.

The 12th edition of the United Nations Environment Programme (UNEP) Emissions Gap Report 2021 titled ‘The Heat is On’ was released on October 26, 2021, in an annual series that gives an overview of the difference between where the greenhouse gas emissions are predicted to be in 2030 and where they should be to avert the worst impacts of climate change. The report comes during a fraught year such as 2021 that has been witnessing extreme weather events around the world including droughts, floods, wildfires, heatwaves, and hurricanes.

Five days ahead of COP26, the Emissions Gap Report 2021 shows that climate action is still inadequate. The report clearly states that the world needs to cut greenhouse emissions by half in the next 8 years to reach the 1.5 degrees Celsius target. This means removing an additional 28 gigatonnes of CO2 equivalent from annual emissions.

We are still on track for climate catastrophe: UN Secretary-General Antonio Guterres

“As world leaders prepare for COP26, this report is another thundering wake-up call. Less than one week before COP26 in Glasgow, we are still on track for climate catastrophe,” said UN Secretary-General Antonio Guterres. The emissions gap is the result of a leadership gap, Guterres added.

The Executive Director of UNEP Inger Andersen also noted that in order to have a chance of limiting global warming to 1.5 degrees Celsius and reduce greenhouse gas emissions by half, we have 8 years in which we must make the plans and policies, implement them and ultimately meet the carbon emissions reduction targets. 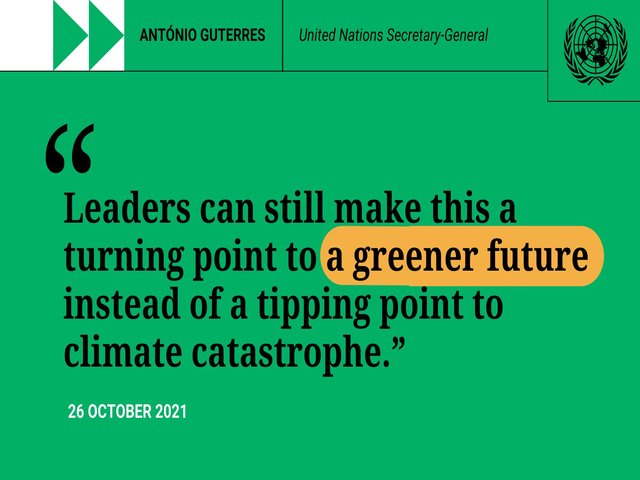 1. After an unprecedented 5.4 per cent drop in global carbon dioxide (CO2) emissions in 2020, there is a strong rebound in the level of CO2 emissions is expected by 4.8 per cent in 2021. The level drop in total global greenhouse gas emissions in 2020 is also expected to rise.

2. As of September 2021, 120 countries that represent just over half of the global greenhouse gas emissions have announced their new NDCs. These new mitigation pledges for 2030 have shown some progress in reductions but their aggregate effect on global emissions is insufficient. Of the G20 member countries, the US, the UK, the European Union and its 27 members, Argentina, Canada, China, Japan account for the largest reductions. Australia, Indonesia, the Russian Federation have submitted their NDC targets that do not go beyond its previous NDC targets. India, Saudi Arabia, Turkey have not yet submitted new NDC targets.

4. The announcement of long-term net-zero emissions pledges by 50 parties covering more than half of global emissions is a promising development. However, these pledges show huge ambiguities. Globally, 49 countries and the European Union with its 27 members have pledged a net-zero emissions target.

5. Twelve G20 member countries have currently pledged a net-zero target that put emissions on a clear path towards net-zero pledges. However, of these 12, six are in law, four are in government announcements, and two are in policy documents. There is an urgent need for near-term targets and actions to achieve net-zero emissions targets.

8. Most countries have missed out on the opportunity to use COVID-19 fiscal rescue and recovery spending to stimulate the economy while fostering a low-carbon transformation.

9. Reduction of methane emissions from the fossil fuel, waste and agriculture sectors can contribute significantly to closing the emissions gap and reducing warming in the short term. Methane is the 2nd most crucial greenhouse gas. Current climate pledges cover only one-third of the methane reduction required to achieve the temperature goal of 2 degrees Celsius.

10. Carbon markets can aid in delivering real emissions reductions at lower costs and drive ambition to meet their mitigation goals in both the short term and long term. If rules are clearly defined such as comprehensive greenhouse coverage, quantifiable mitigation goals, robust accounting then they would reflect actual reductions in emissions and facilitate meeting the Paris Agreement goals.

One week before #COP26, we were still on track for a catastrophic global temperature rise of around 2.7 degrees Celsius.

Scientists are clear on the facts.

Leaders need to be just as clear in their plans to avoid climate catastrophe. pic.twitter.com/EpGuuOd4YL

Also read: CoP26: What is the UN Climate Conference and Why is it significant?- Know in detail