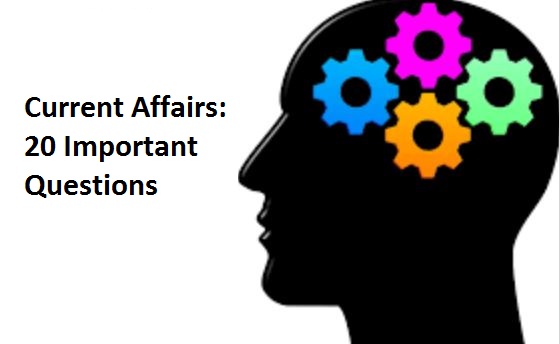 1. Which organization has selected Kristalina Georgieva as the new head?
a. EU
b. IMF
c. ADB
d. ECB

2. What is the name of Rajasthan’s 16 year old girl who was awarded the 'Changemaker Award' by Bill & Milinda Gates Foundation for bringing change in society?
a. Lalita Malik
b. Suman Awasthi
c. Payal Jangid
d. Deepti Sharma

4. Which among the following vessels was recently commissioned by Defence Minister Rajnath Singh?
a. Varaha
b. Vamana
c. Matsya
d. Kurma

6.  What is the name of India’s first corporate-run train that is scheduled to run between Lucknow and Delhi?
a. Tejas Express
b. Vande Bharat Express
c. Majesty Express
d. Humsafar Express

7.  Who has given this statement in UN climate summit 2019, ““How dare you? You have stolen my dreams, my childhood…..”
a. Sonita Alizadeh
b. Bana Alabed
c. Greta Thunberg
d. Malala Yousafzai

11.  On which date International Day of Sign Languages observed across the world every year?
a. 21st September
b. 22nd September
c. 23rd September
d. 24th September

13.  Who among the following was recently appointed as the new National Security Adviser of the United States?
a. Jay Powell
b. Robert O’Brien
c. Terrence K. Williams
d. Jim Jordan

14. In which city Google Research India AI lab will be established?
a. New Delhi
b. Hyderabad
c. Bengaluru
d. Chennai

15.  Name of the Indian documentary which has been nominated for Oscars.
a. Roar of the Lion
b. Lady Tiger
c. Wild Karnataka
d. Moti Bagh

19.  Which State/UT will start Odd-Even scheme from November 4 to 15?
a. Haryana
b. Uttar Pradesh
c. Delhi
d. Gujarat

1. (b) IMF
Kristalina Georgieva has become the first IMF chief from emerging economy. In 2010, she was named ‘European of the Year’ and ‘Commissioner of the Year’ by European Voice.

2. (c) Payal Jangid
Payal Jangid of Alwar district of Rajasthan, received the Changemaker Award by the Bill & Melinda Gates Foundation in New York for raising the voice against child marriage and child labour.

3. (a) Delhi
Delhi Govt launched single emergency number ‘112’ for Police, Fire, Ambulance and other services. Government announced that even if someone dials 100 or 101 or 102, the call will connect to 112.

7. (c) Greta Thunberg
Greta Thunberg’s address to the UN’s Climate Action Summit and said that no international agency has done anything to save climate. She said that you are stealing future from the children.

8. (b) Jammu & Kashmir
J&K is the first Indian state that issued most numbers of Golden Cards under Ayushman Bharat Scheme. 55 Hospitals including 126 public and 29 private hospitals are empanelled under this scheme in the state.

9. (d) Amit Panghal
Born in Rohtak district of Haryana, Amit became the first Indian athlete to won silver medal in this biggest boxing event. In the final, Amit Panghal suffered a 5–0 defeat at the hands of Shakhobidin Joirov of Uzbekistan.

10. (a) Thomas Cook
Thomaskook, UK-based company that provides travel services, finally went bankrupt with a debt burden. Around six lakh tourists with its bookings got stuck around the world.

12. (a) Dr. Sohini Ganguly
Dr. Sohini Ganguly from Goa University was awarded the Young Scientist Award-2018. She has done significant work in the fields of volcanology, geochemistry and petrology.

13. (b) Robert O’Brien
US President Donald Trump has named Robert O’Brien as new national securit adviser. He has a long career in foreign policy and International relations.

15. (d) Moti Bagh
An Indian documentary Moti Bagh has been nominated for Oscars. It is about struggles of a farmer. Director of the film is Nirmal Chander Dandriyal.

17. (b) Astra
As per the official statement released by Indian Air Force (IAF) the state-of-the-art missile was launched from Sukhoi-30 MKI as a part of user trials by the Indian Air Force.

18. (d) Himachal Pradesh
A toll-free helpline number 1100 was recently launched by Himachal Pradesh government. It has been launched with an aim to provide services to those people who are living in remote areas of the state.

19. (c) Delhi
The Chief Minister of Delhi Arvind Kejriwal announced that Odd-Even scheme will be applied between 4 to 15 November. The objective of this scheme is to curb the pollution from Delhi.

India’s second Multi-Modal Cargo Terminal has been inaugurated at Sahibganj by PM Narendra Modi. It will be helpful in transportation of domestic coal from local mines to other thermal power plants.