David Malpass, senior Treasury official in the Trump administration has been unanimously chosen as the new President of the World Bank. 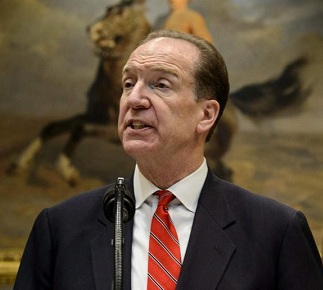 Senior US Treasury official David Malpass  was on April 6, 2019 unanimously chosen as the new President of the World Bank.

The announcement came as expected just prior to next week's joint spring meetings of the World Bank and the IMF. The selection was made by the World Bank's board of directors after an open and transparent nomination process in which citizens of all membership countries were potentially eligible.

Though citizens from all member countries are considered eligible for the bank's top job, since its inception following the second World War, all of the bank's presidents have invariably been from the United States.

Similarly, the top position at the bank's sister institution, the International Monetary Fund, has been held by European leaders.

Many, including former Treasury officials from both political parties, have sharply criticised Malpass and his qualifications, pointing to his failure to foresee the global financial crisis during his time at the now-defunct investment bank Bear Stearns and his opposition, which later proved unjustified, to post-crisis Federal Reserve policies.

Vikram Kirloskar on April 6, 2019 took charge as the new President of the Confederation of Indian Industry (CII).

In other decisions, the CII revealed that Uday Kotak, founder and MD and CEO of Kotak Mahindra Bank will be the President-Designate, while TV Narendran, the CEO and MD of Tata Steel will be the Vice President for the period 2019-20.

• Kirloskar has been associated with CII for three decades and has been the chairman of Global Innovation and Technology Alliance Board since its inception in 2012-13.

• He has over 24 years of experience in the business of manufacturing automobiles and auto parts.

• He also serves as the Vice Chairman of Toyota Kirloskar Motor Private Limited.

• He served as the Director of Kirloskar Brothers Limited from June 2001 to May 2015.

• Before that, he served as the Director at Onmobile Global Limited from August 2007 to August 2008 and Kirloskar Oil Engines Limited.

• He is a member of the National Council of Confederation of Indian Industry.

• He was conferred with the Suvarna Karnataka award by the Karnataka Government, in recognition of his efforts in expanding and developing industry within the state.

• As far his personal education background is concerned, Kirloskar holds a Bachelor of Science in Mechanical Engineering from the Massachusetts Institute of Technology, Cambridge, USA.